There are now some photos on the Fungus Blog of the fungi, etc. found last Saturday on the foray to Stoodley Glen.

We had done it the previous year one month earlier and there was a different set of fungi to be recorded.

Most notably absent at this later date were the Russulas, or Brittlegills,  of which we had a range of species in late September last year.

Five of us were on the foray and it took place in finger-nipping temperatures but with beautiful bright sunshine.

The woods were at their colourful best, especially the beeches, whose bright orange leaves literally covered the surface of the canal in places.

Near the canal we found a single perfect example of a Blusher Amanita rubescens. 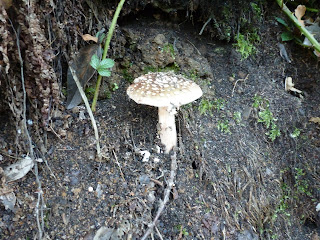 A little further on were about 30 White Saddles Helvella crispa.
I was fascinated to see these for the first time in the flesh. 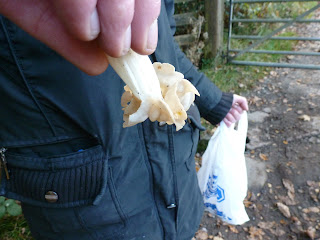 Through the woods we had many small brown difficult to identify species, but a large tuft of Shaggy Scalycap Pholiotta squarrosa
was unmistakable. There were also two yellow Pholiotta specimens of a different species which grew singly out of tree trunks at about a metre above the ground. 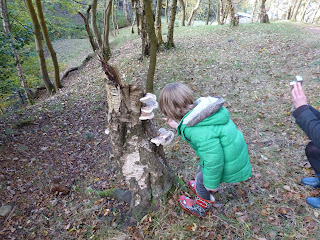 Some large fresh Birch Polypore or Razorstrop Fungi, Piptoporus betulinus near the ground delighted the youngest member of the group, Oliver, with their rubbery hardness.

In the fields, which are unimproved pasture on steep, infertile soil, we found three species of Waxcaps, Hygrocybe pratensis (Meadow Waxcap), one of the small red Waxcaps, and a tiny specimen of a Parrot Waxcap Hygrocybe psittacina, with a flush of bright green on its cap.

There was also a tuft of  Yellow Club Clavulinopsis helvola or possibly Apricot Club C. luteoalba.

The beech plantation confirmed the feeling  from other sites that this is a good Amethyst Deceiver Laccaria amethystena year, with many shining purple in the sunshine, up to about 5cm across.

The view back down the glen with the sun on the landscape and all the woods changing colour was gorgeous, and we retraced our steps after our picnic lunch, as we had a good haul of fungi already to identify; leaving the crossing of Erringden Moor to Broadhead Clough Nature Reserve for another day. 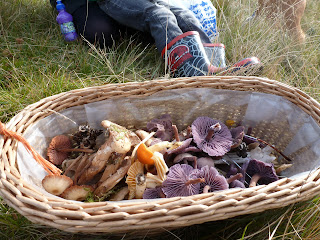 Incidentally, just one branch of the three crabapple trees was found to be well laden with fruit, confirming my suspicion that it was the cold nights in April and May that saw off our fruit crop this year, by killing the fruitlets, not poor pollination. (The fruiting branch we saw was well sheltered from the wind, low down in the middle of the thicket.) We imagined the wild boars of old snuffling up the fallen crabapples, and the bears standing up to gorge straight from the branches. (These were the original animals this tree depended on to disperse its seeds.) 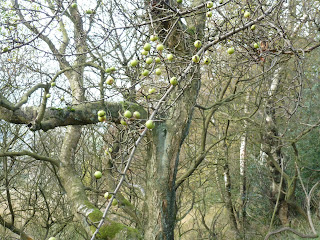 For those determined to learn as much as possible about fungi, I can do no better than recommend the British Mycological Society

www.britmycolsoc.org.uk   It has a cool kids page !

With thanks to Nigel K for the correct address. 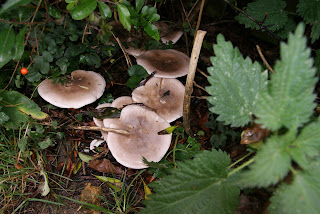 Found in my garden in Holywell Green this morning. Possibly Oyster mushrooms. They smell delicious, just like a fresh edible mushroom.
At least something is enjoying this grey, damp weather. 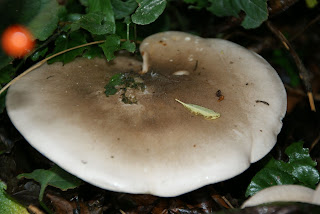 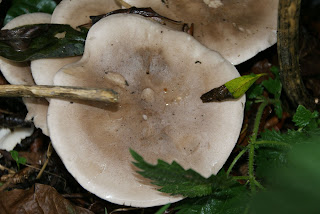 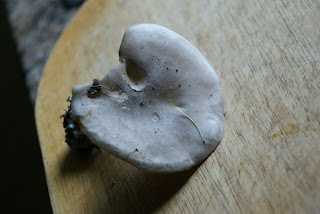 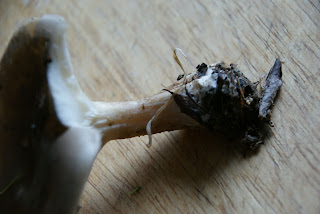 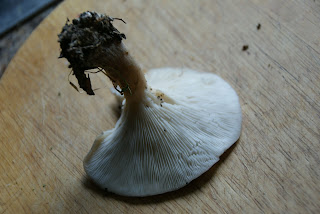 Yes, it looks like an Oyster, Linda. If you take a spore print, it should be pale lilac. If it were a blewit, it would have a strong perfumey smell, and make a pale pink spore print. Both are edible by the way, not that this blog is just about edible fungi, everybody.
Oysters are  Pleurotus “like lungs” as in pleurosy.
Thanks for you post
jamieharrop2012-10-25T16:13:00+01:00October 25th, 2012|0 Comments

This is on a dead tree at the end of  New Lane, Skircoat Grreen, near the Standard of Freedom Pub.
it is dark brown on top, instead of the usual pale beige of Pleurotus pulmonarius (wild and in the shops) and P.ostreatus in the wild which is bluey-grey on top.

This gets variety gets a mention in Arnolds (1990) which was in the late Colin Duke’s library.

It is growing on a dead Cordyline stem – killed by frost a few years ago. (Cabbage Palm.)

Reminder fungus foray this Saturday at Stoodley Glen with Halifax Scientific Society. (See bottom of post below.)  All welcome. No charge.

Ash die-back, Chalara fraxinea, is a serious disease of Ash trees. It has spread all over Europe and one scientist has suggested that our country could be the only one in the whole of Europe with any Ash trees remaining. This is providing we keep the disease out, yet it has just been found in a wildlife trust wood in Norfolk where the disease has killed many coppice stools.

It is essential to stop imports of ash saplings from Europe but our government is still ‘consulting’. In the meantime the fears are it is only a matter of time before we have a devastation worse than Dutch Elm disease. 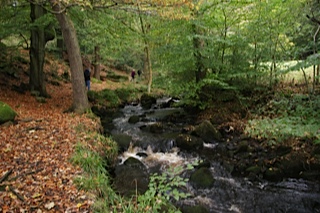 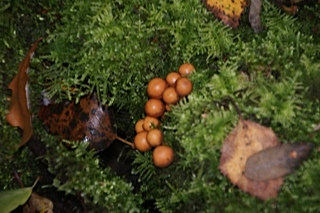 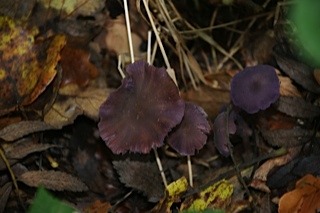 Laccaria amethystina, Amethyst Deceiver.
“Deceiver” because it’s in a tricky group. Said to be edible but I’ve not eaten it. 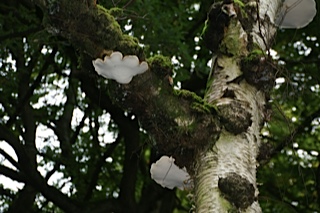 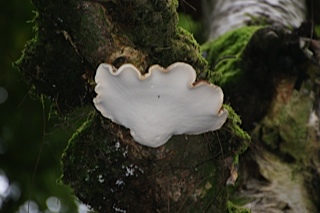 A very scalloped form of Birch Polypore, maybe a different species. Inedible but found in the pack carried by 5,300 year-old ice mummy  named “Otzi” found in 1991 in the European Alps. May have been valued as an anti-biotic, or can be used to sharpen blades. Also known as Razorstrop Fungus. 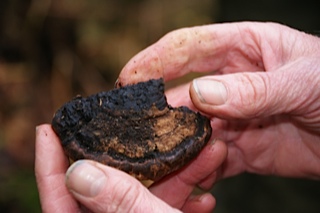 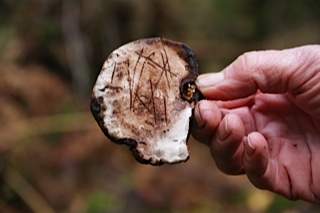 Upper and lower surfaces of Artist’s Bracket. Ganoderma applanatum. The white undersurface scratches to create a dark brown line – said to have been used for sketching purposes. 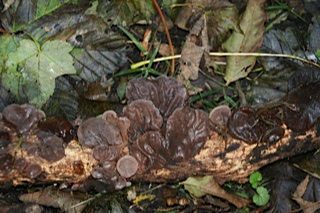 Tree Ear or Jelly Ear, Auricularia auricula-judae. Used to be said to be confined to Elder, but on finding it on several different species of tree and talking with Professor Roy Watling, he informed me it is under review and may be split into different species. Edible  –  I was first served it in a Thai restuarant in France. I once ate too much of it at home and got a very uncomfortable bloated feeling in my stomach. 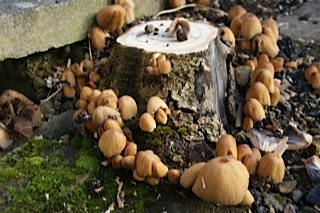 Meet at Eastwood Cricket Club on the main A646 road between Hebden Bridge and Todmorden.
Parking is OK on the main road overlooking the cricket ground, but take care – it’s a 40 limit and some drivers speed a lot faster than that. SD965252

It is served by buses, such as the Todmorden and Burnley services.

Meet at the junction – marked “Stoodley Glen”. We will be taking the track up Stoodley Glen.
If  the weather is good we might go over the top and down into the valley bottom at Mytholmroyd, where a bus can take us back along the main road to the cars. People can retrace their steps if they want to leave early.

At the top of the wooded glen, the path goes through classic unimproved grassland with a good selection of grassland fungi including,  last year,  pink waxcap and hare’s ear. I have occasionally seen actual hares up there, and there are some of the few local wild crabapple trees. It will be interesting to see if  they have suffered from the cold spring like the garden apples and crabapples.

There are, interestingly enough, crabapples just over the watershed in Broadhead Clough, though these are not possible to get to, as Yorkshire Wildlife Trust requests we stay on the footpaths in the reserve.

It’s a puzzle why these relict trees don’t regenerate any longer. I have my theory it’s because there are no longer any wild mammals that would eat the fruit and deposit their seeds with their dung on soil where the turf was broken through by their piggy hoofs/ bears paws.  Of course sheep nibble off seedlings as well.

Get a glimpse back into the MIddle Ages as well as a fungus foray!

These were seen in Triangle by Michael Sykes.
Thanks for the pictures Michael.

These are the eggs from which the Stinkhorn arises. If you were to put them in a large jar-say a sweet jar with wet tissue in the bottom they would probably turn into a fully erect stinkhorn in around 12-24 hours. Make sure there is a strong top on the jar?/ these were in Longwood ,Calderdale today.

Chicken of the Woods in Longwood this a.m.

This weather should be wonderful for fungi though there were very few in Longwood. I think you would need very strong teeth for this chicken which was about 20 feet up the tree. 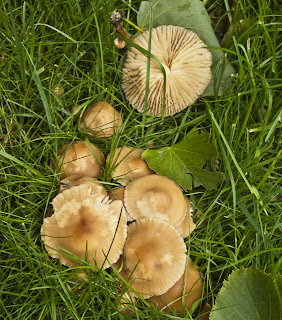 This mushroom is often called the “fairy ring mushroom”, since it frequently fruits in rings on lawns, in meadows, and in other grassy places, although other species such as Chlorophyllum molybdites, (which is poisonous and unlikely to be encountered in the UK) and Agaricus campestris, (field mushroom) can also form rings. 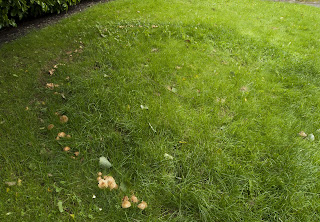 Mike Sykes joined us for a short time on one of the Calderdale Wildside walks at Ripponden today. There were 14 of us. On his way back he found several fungi and a slime mould. Also the party saw some of the native daffodils near Rishworth and the very reliable Little Owl on Cliff Lane.

Clavaria zollingeri, Commonly known as the violet coral or the magenta coral.
This specimen was found by Michael Sykes a couple of years ago. It is rare in the Uk and usually only found in the south. it appears occasionally in the Blackshaw Head area of Calderdale.

These are some of the Fungi seen at Ogden on Monday. Thanks to Michael for the I.D. 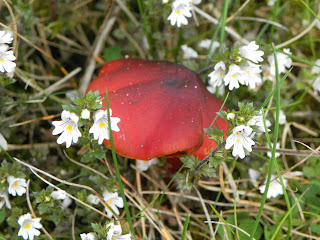 An unidentified fungus surrounded by Eyebright (Euphrasia) at Fly Flatts.

10 members and friends + 2 dogs had a foray in Wade Wood. Here are some of the pictures.

This looks like the remains of a jelly fungus found at Ogden L.N.R. 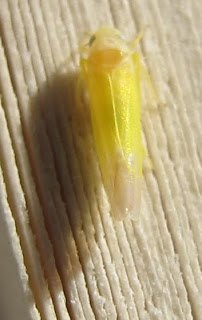 This eight of an inch long yellow (greenfly?) crawled across my book pages as I was reading. A lovely colour but not one I’ve seen before. Does anyone know what it is?

The Environment Agency is advising local authorities they should no longer compost street and highway leaves but instead send them all to landfill. The story is the leaves may be contiminated by oil residues.
I wonder what has changed? Leaves have always fallen from trees and the motor car is above a hundred years old.