Small Tortoiseshell emerged from hibernation today and fluttering round our house.

Some of us want to fit another walk in because the next scheduled is not till 27th February to Hardcastle Crags. Members of the Upper Calderdale Wildlife Network are invited to join us.

It seems a while since the last walk; the one on 1st January – the New Year Bird Count.

Up on the tops of the Pennines we might see some interesting birds, and maybe find that Cranberries still grow near Cranberry Dam. Bring a snack and a drink. It is a short walk of less than 3 miles, but there are rough paths and a couple of stiles to negotiate.

It is spectacular rugged geology. We will be looking at everything – not just birds. No doubt we will pass some Flying Bent collecting sites. It will be interesting to see what the area looks like after the Boxing Day deluge.

Meet on Sat 23rd January at the bridge over the Calder at Todmorden Bus Station.
Time; 10.30 for 10.40.           Lifts available up to the start of the walk at Walsden.
Buses come in regularly from Halifax. (The whole journey is 49mins.)
Or lifts from Halifax.

Please say if you can come by posting a comment here or contacting me. 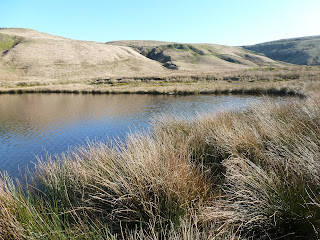 Cranberry Dam on an earlier visit.
A further Bird Group activity I propose is installing nest boxes during February if readers can suggest locations. I want to attract Starlings and collect BTO Nest Records.  (British Trust for Ornithology.)                               They need walls or trees 2.5 metres or higher.
What we did and What we Saw on the day.
Nine people braved the mud and got up to the dam without too much trouble.
I personally was gutted to see an array of giant wind turbines all along the skyline. They’ve been imposed since I was last up there. I suppose people have to jet-wash their patios.
Two large raptors took to the air as we approached the dam. They were buzzards, Common Buzzards most probably but we didn’t see them soaring, or well enough to be certain.
As we ate our lunch in the shelter of a wall ( there was a damp breeze, ) we saw only Carrion Crows but there was definitely a Raven somewhere. I heard its deep “prruk” call once.
A Mistle Thrush was singing at Ramsden Wood, and a black rabbit fortunately escaped the dogs up near the dam.
We found no cranberry plants. Someone suggested  the dam might have been built by someone called Cranberry  🙁 . . . .
but there was much hair moss (Polytrichium sp.) and a small amount of sphagnum moss.
We have found cranberry associated with sphagnum before.
Anyway we enjoyed the rugged scenery, especially at Ragby Bridge, where the woodland was compared to a mini-Hardcastle Crags.
In the valley on the way up, it appears that there is a natural scree formation under the cliffs; I can’t think of any other such in Calderdale. Above it there is a natural re-growth of young trees to supplement the few Oak and Common Ash that cling on there.
Also, in the ravine below the dam is a “Rock-run” of small stones down a slope. These are such a feature of parts of the Falkland Islands (special plants grow in them there,) that Charles Darwin discussed them in his memoirs of his visit during the voyage of the Beagle.
Some information boards around Middle Ramsden Farm, placed by Natural England, were disappointing for their misleading information and dilapidated, weather-affected condition.
Judy took us to a ruin she remembered where the arched cellar was intact. Down there Peachysteve identified five different ferns. Common Male Fern, Hard Shield Fern, Hartstongue, Maidenhair Spleenwort, and another I can’t remember. 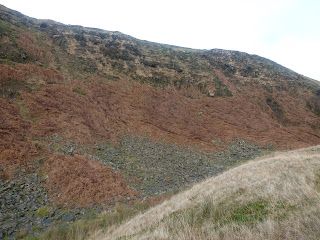 Is this true scree, and is there another in Calderdale? 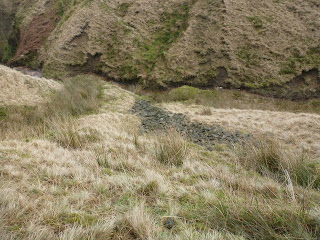 A “Rock-run”. I have read an explanation of how they are formed. 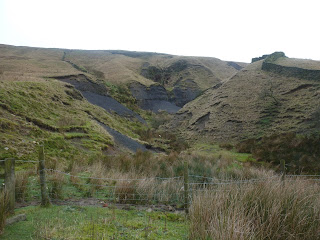 The shale hillside exposed possibly by overgrazing in the past. 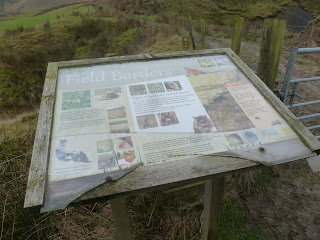 Many older grass books refer to Purple Moor Grass as Flying Bent. This is a good observation for this grass where all its foliage dies above ground in Winter. The leaves then become airborne in windy weather and get trapped on fences, the sail like effect can then break fences in heavy weather. Sometimes dry stone walls are completely covered in a mass of dry leaves on the windward side.
These 2 photos taken up Kebs Road above Todmorden give good examples of Flying Bent having landed!
Incidentally, the stems of this grass used to be twined by fishermen in the Orkneys to make ropes; also prized by continental fishermen as enduring longer then hempen twine. Countrymen made brooms from its strong and long straw—sold cheaply it is said. From “Gramina Britannica-J L Knapp” 1804. 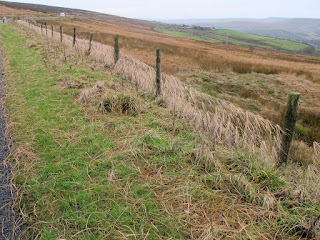 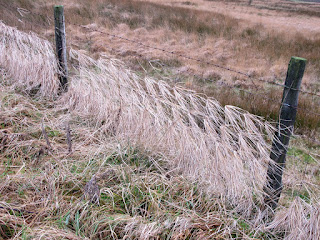