Acute Oak Decline and Chronic Oak Decline are terms used for the large numbers of older trees (above 50 years) which are showing signs of dieback and stress. AOD is affecting increasing numbers of Oaks each year and can kill the tree within 5 years. This blog does not all copying. Go to Google either of those diseases there is plenty of info there.
The affected trees are mainly in the eastern counties, midlands and south of England. There has been much research on the causes but recent work has suggested AOD and COD are the same disease at different stages of the spectrum. There was a theory that the Agrilus Beetle was part of the problem but it is more likely the beetle activity is taking advantage of already weakened Oak stems.
More recent research is looking at the soil environment and there has been found a strong link between high Nitrogen levels (from farming/air pollution/car exhausts) in the soil and the mapped trees that are showing symptoms of the disease.
What may be happening is the altered soils are affecting the essential link between mycorrhiza fungi and the roots of Oak trees. The roots need the fungal association to help with water uptake. When this link is severed, then the trees die from lack of water, particularly in the already drier parts of the country such as East and South.
There is a worry that essential fungi are dying and soils generally are being degraded.
jamieharrop2017-08-24T14:57:00+01:00August 24th, 2017|0 Comments

I won’t give a summary of the walk as others are better qualified for that, suffice to say there was a good turn out of fifteen people and a couple of dogs and the weather was great after an ominous start to the day.

As is usual on the higher part of the moor micro moths were few and far between, in fact I only saw three all day but two of those were new to me 🙂 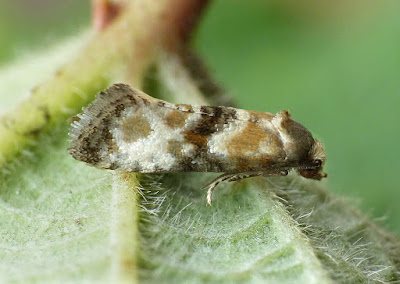 No Annie, it wasn’t a White-streaked Badger Moth but Eupoecilia angustana. It’s larvae feed on the flowers and seeds of Heather amongst other plants. 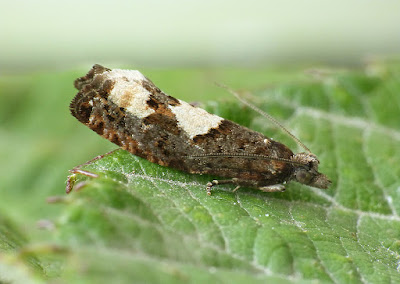 This was in the grass at the base of an isolated birch tree – Epinotia trigonella. It’s larvae feed on the spun leaves of birch. At 10mm in length it’s nearly twice the size of the previous species. This one brings my list of Lepidoptera seen in Calderdale to 499…….
The third micro was a Agapeta hamana lying face down in a puddle!
Lots of leaf mines and coleophora cases seen but I’ll not trouble you with a list of meaningless latin names.
Other leps were:
Silver Y x 3 flying wildly after been disturbed
Peacock sunning itself on Heather
Small White x 1
One Buff-tip larva doing well to avoid being trampled or run over in the car park. 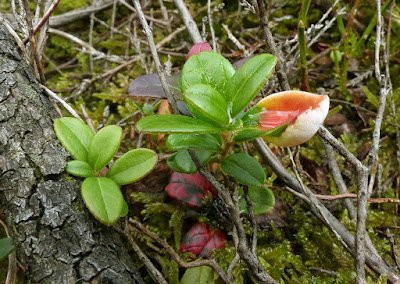 Also of interest was this Cowberry plant hosting the fungi – Cowberry Redleaf (Exobasidium vaccinii). It deforms the upperside of the leaf turning it a reddish colour and the underside is covered in a white spore-bearing powder. I don’t think this is the usual rust or smut but more closely related to the jelly fungi, sharing the same phylum.
jamieharrop2017-08-24T11:03:00+01:00August 24th, 2017|0 Comments

Volunteers needed!  Please see below the note from Katie Aspin of the RSPB:
As you may be aware, the Twite Recovery Project has been working with farmers to increase food availability for Twite during the breeding season, mainly through restoring hay meadows with key Twite food plants including Dandelion, Common Sorrel and Autumn Hawkbit.  Autumn Hawkbit is an important food source for Twite late in the breeding season, however, botanical surveys last year showed that this species hasn’t taken particularly well in some of the reseeded meadows.  Natural England have therefore approved a grant to buy some Autumn Hawkbit plug plants, which we hope will do better than the seed.  We are looking for volunteers to help us to plant these plug plants in September at farms near to Ripponden, Rishworth and Marsden.  If anyone would like to help out, please let me know which dates you could make from the list below:
Monday 18th September
Tuesday 19th September
Monday 25th September
Tuesday 26th September
Any time you could give would be very much appreciated, we have over 3000 plug plants to plant!
Many thanks,
jamieharrop2017-08-21T10:46:00+01:00August 21st, 2017|0 Comments

This group of 6 spikes has survived since July 5th (see earlier blog) right next to the cycle track beside the standing stone on Norland Moor: now producing seeds. 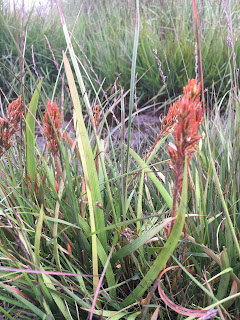 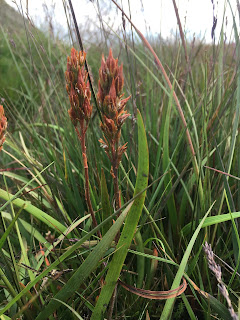 At the monthly meeting last night when we were treated to Philip Marshall’s excellent talk on historic trees I announced in the second part of the meeting that there was to be a walk to Howarth from Mount Tabor on Friday 11th August, (returning by bus we had planned.)

It is an impromptu walk ( not in the programme.) Some of us want to to commemorate the book “A Spring-time Saunter” by Whiteley Turner about a four-day walk he did in 1904. We were prompted by the upcoming talk “Uncovering Bronte Country” which we are hosting on September 12th.

I will obviously go to the meeting-point to check if anyone turns up.

Yesterday morning (Tuesday August 8th) I found this beautiful creature almost drowning on the metal walkway outside our building. Unable to identify it, I sent the photo to our very own Moth expert, Charlie Streets. For those people at last night’s meeting who also didn’t recognise it, Charlie has identified it as a Lesser Swallow Prominent (Pheosia gnoma), showing the chocolate brown head and thorax typical of the Northern form (apparently!). Charlie also supplied this useful link: 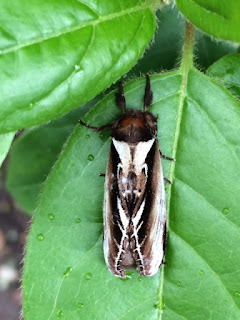 For those who were enquiring at yesterday evening’s talk where this magnificent weeping beech is growing; it is in the local park at Evesham in Worcestershire. I have never seen a better specimen. 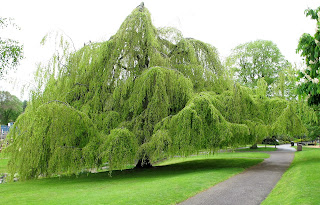 Beech in Evesham Local Park
If anyone wishes to visit this 1,000 year old Oak, which has a girth of 9.08 metres, it is at Ripley Park in Yorkshire. Originally it would have stood within the Forest of Knaresborough. But this was not a Forest of trees as we understand the term. 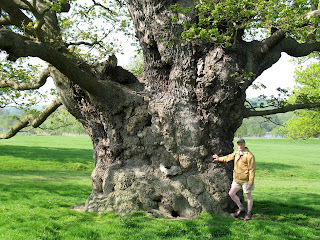 A talk invitation to Derbyshire – about Mammals we have in Calderdale.

From: Margetts Joseph [mailto:Joseph.Margetts@peakdistrict.gov.uk]
Sent: 28 July 2017 12:45
Subject: Otters, water vole and mink evening talk invitation
Join us for an evening talk with experts to find out more about the fascinating lives of these enigmatic mammals, their current status, prospects for the future, and how climate change may be affecting them.
Wildlife photographer and cameraman Jack Perks (BBC Springwatch and Countryfile) – who specialises in capturing underwater footage – will be sharing with us some of his experiences filming otters and water voles on UK waterways.
All are welcome to attend this FREE event, and light refreshments will be provided.
You can reserve your place here: https://www.eventbrite.co.uk/e/otters-water-vole-and-mink-evening-talk-and-survey-launch-24th-august-tickets-36508385564
Moors for the Future Partnership are launching a survey of ‘Tails of the Uplands’ through our Community Science project – focusing on otter, water vole and mink.
This event will not only be a chance to learn more about these amazing animals, but an opportunity to find out about the ways you could get involved in keeping track of these species.
Event Details:

Nearest train station: Hathersage (5 minute walk) which is on the Sheffield – Manchester line.

Parking: There is a large pay and display car park directly opposite the Hathersage Memorial Hall, which costs 50p for the whole evening after 6pm. There is also some free on-road parking on nearby side roads.
Joseph Margetts
Community Science Project Communications Officer
Moors for the Future Partnership
The Moorland Centre, Fieldhead, Edale, Derbyshire, S33 7ZA.
01629 816 585
07972 734 157
Joseph.Margetts@peakdistrict.gov.uk
Website: moorsforthefuture.org.uk
Facebook: Moors for the Future
Twitter: @moorsforfuture
jamieharrop2017-08-02T20:39:00+01:00August 2nd, 2017|0 Comments
Go to Top