I learned its proper name (Hebblefoot) in an old article. Like Brookfoot and Luddendenfoot, it denotes the spot where a tributary stream joins the River Calder.

Others may know it as the Calder and Hebble junction, or the Salterhebble Canal Basin area.

Heron
Song Thrush
Meadow Pipit  2 , probably displaced by deep snow on the tops – unusual here. Feeding along the water’s edge.
Goldcrest
Dipper
Mallard 2
Tree Sparrows used to nest in a hole in the masonry of the railway viaduct in the 1990s.

Very pretty all round in the snow.
Generally squalid without snow but often quite rich in birds.
A long time since the canal froze!

The naturalists of old left many records of water plants and water snails from this area.

Possibly Elfin Saddle and an unidentified fungus over on main blog

At the Calcareous Rock Outcrop in Colden Dale on Sunday 25th Feb, we found the two fungi above.
See Calderdale-wildlife blog. 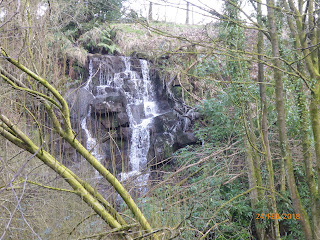 Thirteen attended the walk plus two dogs. Peachysteve pointed out  a short diversion from Ryburn Reservoir footpath into Drumming Wood where this waterfall can be seen, and later on he produced Cowhorn Bogmoss, a sphagnum species, on Beeston Rocks. These, along with the varied views along the reservoir and with trees right down to the water’s edge, give this dam a scenic aspect  finer than many of the other local ones; like a little Lakeland water. 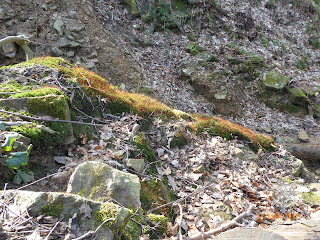 A carpet of strikingly red-stemmed moss on disturbed ground. 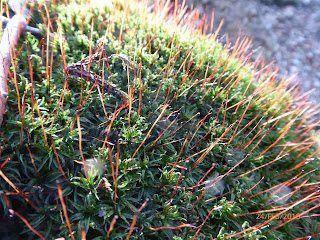 We walked a circuit of  Ryburn Reservoir, making three detours up feeder streams, looking at the mosses and what ferns we could find still holding onto some green foliage in February.
I had said the dam doesn’t often attract interesting wildfowl, but on the last stretch of water we found a male Goldeneye diving and feeding not far off and easy to see in the bright sunshine for those with binoculars.
————————————————————————————————–
Colden Dale on 25th Feb.
Some of us hadn’t got much of a look at the calcareous rock outcrop on the walk on 27th January, only reaching it as the rest of the party moved off, so we took ourselves up there on a spare Sunday.
This is the big one on the east side of the valley, long known and the plants studied and recorded. Johnny Turner, a resident of Colden Dale, has since found a matching smaller one on the west side of the valley, as written about earlier in this blog.
There is a well-known one in Hardcastle Crags, the next valley, on the eastern slope of the valley. It’s interesting to speculate there might be one on the south-western side, perhaps a continuation through the hill of this one in Colden Dale. 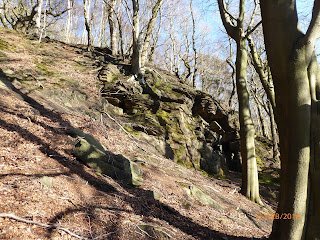 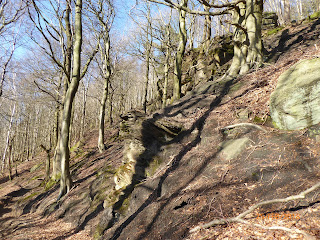 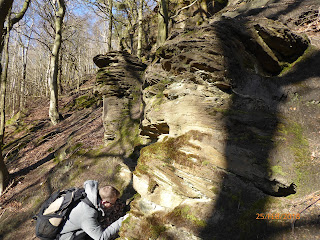 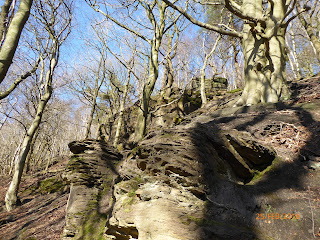 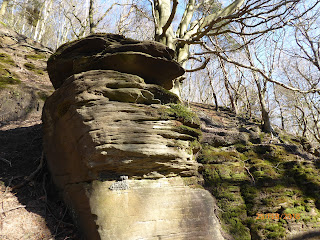 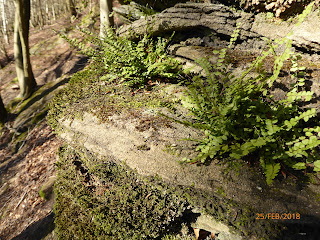 Maidenhair Spleenwort; apart from on these calcareous sandstones, is almost confined to old walls with lime mortar in Calderdale.. 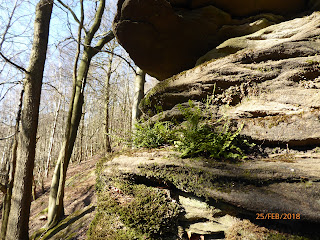 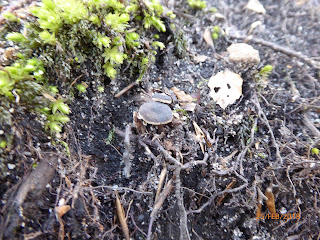 A very interesting mushroom (above,) about 20mm across. The underside had pores; but unusual wide-spaced pores, like holes in a little colander. I think Julian got a good picture of these. 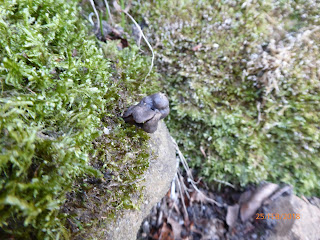 A tiny fungus, possibly Elfin Saddle, Helvella lacunosa (above and below.) 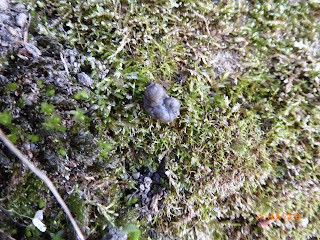 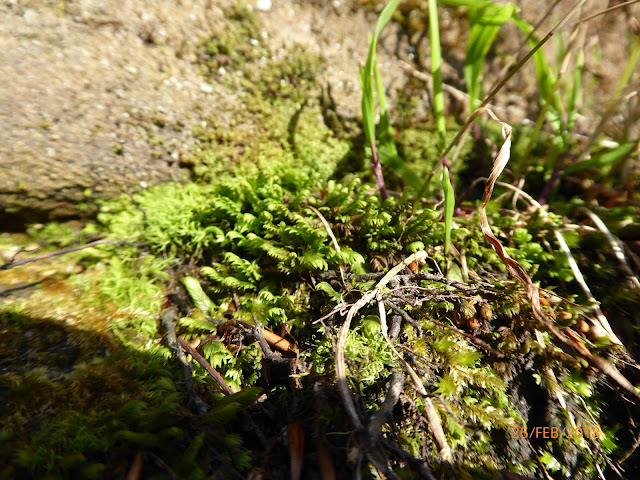 A stunning moss with leaflets like a miniature fern, growing among Wood Melick grass. Mountain Melick was also once known from these rocks in the 19thC.  The top of the outcrop supports a meagre growth of spindly Aspen suckers. It will die out unless the Beeches are not removed that block the sun. They are marked as if planned for removal, but it was a while back, by the fading paint marks. 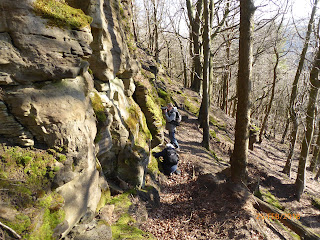 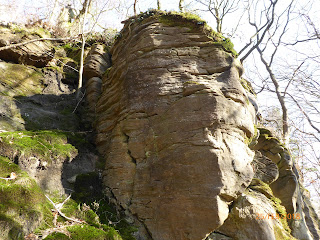 ————————————————————————————————————–
White Butterbur also still thriving and flowering in February in Colden Dale.
After visiting the rocks we went up the valley, where I guessed the White Butterbur would probably be in flower. This is one of only two sites known in Calderdale. Frank Murgatroyd only found out about it just before his Flora went to press in 1994, and too late to include it. It is a long term garden escape. The other site is near Sowerby Bridge. I’ve found it also in a clough just over the Kirklees – Calderdale boundary, (Wool Clough near Marsden.)
At Colden it stretches for 22 yards along the bottom of a field where the Calderdale Way goes across the top, and creeps along the damp sides of a small watercourse a few yards into the wood below. 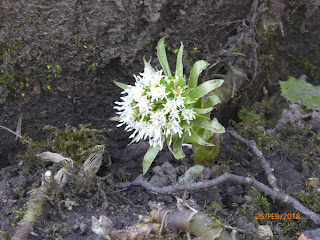 White Butterbur Petasites alba
I haven’t mentioned many birds; others as well as myself write over on Calderbirds.blogspot about what they have seen. I have shortcuts to both on my laptop, or there is a tab at the top.
jamieharrop2018-02-27T23:21:00+00:00February 27th, 2018|0 Comments

1,000 years of history in this collapsed Oak

From a news report last week.
“One of the oldest trees in Wales which was probably planted 1,000 years ago as a boundary marker along Offa’s Dyke has fallen down.
The Buttington Oak was spotted collapsed in its field two miles from Welshpool in Powys by a man nicknamed the “tree hunter”.
Rob McBride said he was sad to see such a significant tree grounded.
The tree’s girth measured 11m, which made it about 1,000 years old, he added.”
——————————-
The problem is that none of our really old trees have any legal protection. Old buildings of this age would be listed, yet they can be rebuilt.
Ancient and Notable Trees need to have a protected root area and the soil left alone within this zone.
Is it significant this Welsh tree appears to have cultivated soil and crops under the crown and up to the trunk?
In my travels I see many trees within cultivated fields that are dying due to the soil ploughed up to the trunk, or excess nitrogen application destroying the essential surface roots. It is a fallacy that tree roots go deep down into the soil; most are within the top few inches and spread widely, often great distances beyond the crown spread. 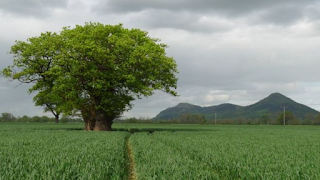 This very scarce fungus is now fruiting again on the old Christmas trees at Ogden Reservoir. See picture on the Fungus blog. (Tab at top.) 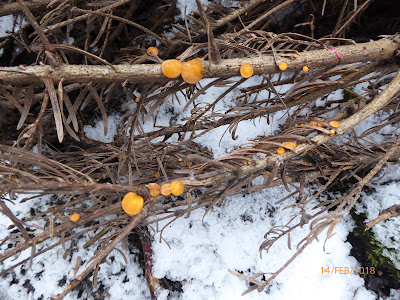 Today at Ogden Reservoir, Calderdale. I haven’t seen it since the first winter it was found by Bruce Hoyle, and after great persistence on the part of Alison Galbraith, it was identified for us at Kew, how many years back I can’t remember. Two or three? 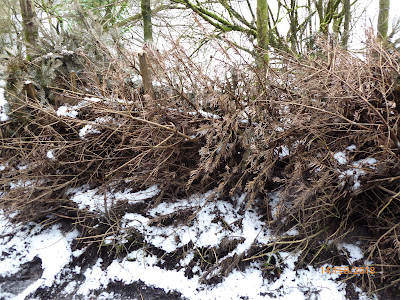 The barrier of old Christmas trees, where the Pithya grows on the dead Abies nordmannii between the perimeter path and the water, a way of disposing of them, while also preventing dogs entering the water and the shore, where birds can now breed without disturbance. (If they can tolerate the many walkers and dogs that pass close by.)
jamieharrop2018-02-14T19:37:00+00:00February 14th, 2018|0 Comments

In Devon they have observed Beavers happily munching on Himalayan Balsam; also the kits followed their parents and copied the behaviour. Another good reason for introducing Beavers more widely. 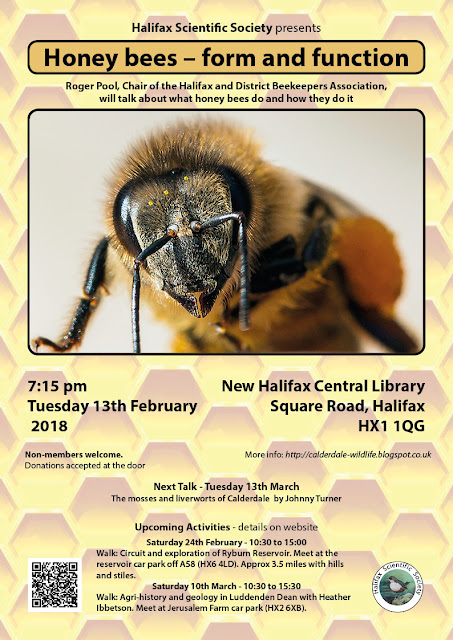