As a change from the annual Bluebell Walk round Elland Park Wood this year we are following the river along from Elland; meet 10.30 at junction with Gasworks Lane, half way along the Elland Bridge.

You can take yourself back in time before the canal was there and before the main road from Elland to Brighouse was built, and imagine the sweep of bluebells going right up the hillside from the river.

It was at this period in history the Autumn Crocus must have been introduced from the Pyrenees, and there are at least two spots where we will see the leaves, which are only up in spring. In fact spring is the best time to locate the patches, as the flowers are so short-lived.

Lots of other interesting plants and birds too!

It’s a fairly easy walk, with no great hills but there will be some moderately muddy footpaths.
About 3 miles.

I went up hoping for emperor moths, without luck, though did get some other good stuff, including the beetle Carabus nitens, something I’ve been dying to see for years, green tiger beetles and my first wimberry bumblebee (Bombus monticola) at this location. 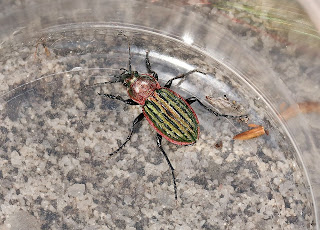 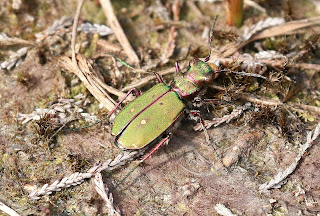 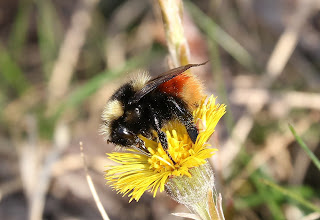 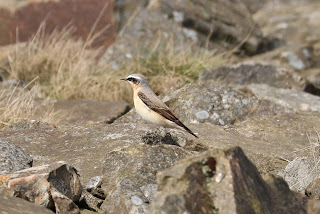 This Sycamore in our woodland has been dead for more than a decade. The short remaining length of upright trunk has only Ganoderma fungi growing round the stem.

Two separate lengths of this tree that lie on the ground have only Hoof Fungus–Fomes fomentarius, growing extensively along their rotting trunks.

It is said that dead trunks remaining upright have a different suite of fungi than trees lying on the ground.

I believe Hoof Fungus is not often seen in Calderdale, so I am pleased to have found such a large gathering. Books always say it has a preference for Birch but not in this case. Thanks go to Peachy Steve who helped confirm the identity and steered me away from Ganoderma pfefferi.

Interesting facts about Hoof Fungus:– The flesh of the fruit bodies can be soaked in water, cut into strips and then beaten into fibres. The resultant fibres are called Amadou, which was used by dentists for drying teeth and surgeons as a styptic. Items of clothing have also been made from the Amadou fibres.

The 5,000 year old Otzi the Iceman was carrying pieces of Hoof Fungus, probably for use as tinder to light a fire. 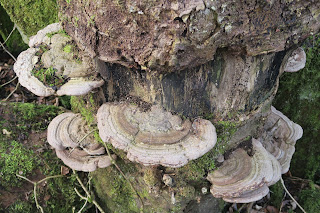 From below, showing the pores 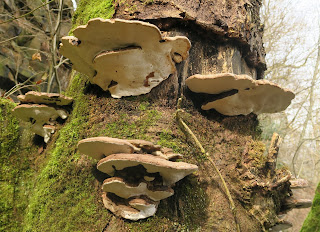 Close up of Ganoderma 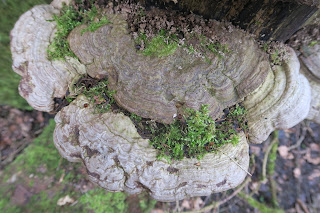 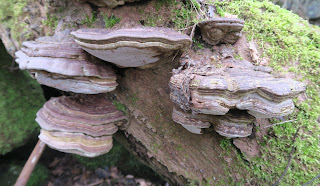 Waxy surface which led me to initially consider G. pfeifferi 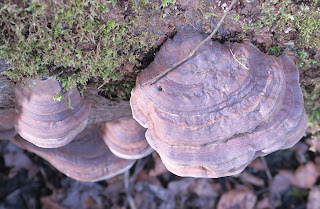 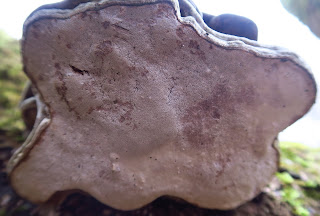 We had a superb day for the scheduled spring Amphibian Walk at Cromwell Bottom, and a good turn-out. 19 people age range 70 to 2.5! Plus Meg the dog.

The Cromwell Bottom Wildlife group kindly had the Cabin open, for the toilets and snacks/drinks. Thank you Jane for coming down early and opening up. Much appreciated. I think there was a work party as well. The reserve was looking great.

Amphibian watching was brilliant, with a male and female Palmate Newts netted in the Top Pond.
We counted approx. 27 clumps of frogspawn in various waters.

The toad breeding site I located at Tag Lock last year  was in use again. we could see about four toads from behind the barrier, and binoculars revealed many spawn strings tangled together in the clear water. This year the chorus of chirps of the males wasn’t going on.

At the Big Pond dipping platform we netted two newt larvae with feathery gills. The bloom of “blanket weed” algae obstructed dipping somewhat, but in itself was a source of fascination to one Mum and two teenage daughters, who compared it to a textile and took some home to investigate further. It was a bright green colour and looked interesting under a 20x hand lens. In the old Halifax Naturalist there are passages about the algae species we have in water and on land, but the writer despaired even then of members ever studying them thoroughly.

Nearing the end of the walk, returning by the canal bank, I described hearing the previous year, but not being able to see, a toad breeding site, and they were calling again today. This time I spotted a male leave the edge of the water to escape into the depths and I caught him in my net. Then we heard the high-pitched calls coming from both sides of the canal. The waiting males obviously sit in the overhang of stones/ herbage at the very edge. We couldn’t spot any spawn-strings though. This was just upstream of Freemans Bridge.

We spent some time at the bird feeding station, and among the commoner residents (Robin, Great Tit, Blue Tit, Chaffinch, Jay, ) we saw Bullfinch, Male Blackcap, Chiff-chaff and four Redpolls. The Redpolls were feeding on insects high in the Goat Willows, as were the Chiff-chaffs.

We are getting less surprised at the regular Buzzard soaring over the reserve, but the views were beautiful in the sunlight when one came quite close. Kingfisher was also seen by one member.

An interesting fungus we saw twice was Yellow Brain, a small, bright jelly on twigs on the ground

The Marsh Marigolds were blooming, also bright yellow, in the old Tag Cut, and the peculiar bottle-brush formed Butterbur flowers were emerging, leafless, from the soil. At Crowther Bridge we looked for and found a good quantity of the Common Whitlow-grass in the joints between the cobbles, a tiny flowering plant which is not common at all.

Finally, we were sure of spring when we saw two Comma Butterflies in courtship flight and one of them sending off a Peacock Butterfly.

In Centre Vale Park today this flowering Liverwort was quite striking and even from a distance it looked like a mist had descended. It has delicate stems with a cream or black, dewdrop size ball at the tip.

The liverwort appears every year but this damp weather we have had recently seems to have cheered it up.

It seems to prefer damp shady places on bare soil and probably does not like competition from other plants—not much chance of that happening on some of the shadier slopes beneath Beech in the Park!

A place for everything; shade is not always bad. 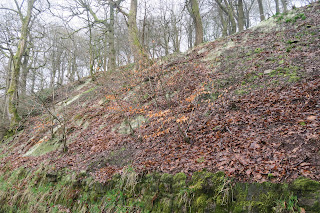 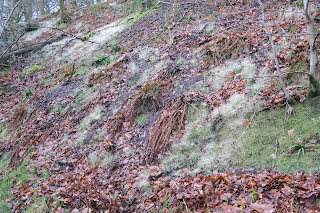 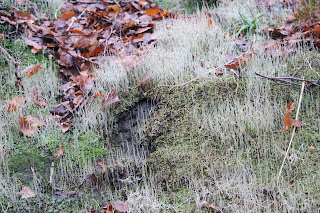 Don’t forget, tonight’s talk and meeting is at the TOWN HALL, Crossley Street, Halifax.  Entrance on the corner by the post box. The talk will be given by Chris Tomson of the RSPB on Farming and Wildlife.  We look forward to seeing you – the meeting starts at 7.15 prompt!

Bumblebees may just buzz off

We are worrying about the wrong bees, says Gwen Pearson in Science magazine.
Honey bees will be fine.  Apis mellifera will not go extinct and the species is not remotely threatened with extinction. The bees we should be concerned about are the wild native species.
In a Research trial (published in the Nature Journal) it found that Honey bees weren’t affected by seeds treated with neonicotinoid pesticides but wild bees were and in a big way. Wild bee density in the treated fields was half that of the untreated fields. Bumble bee colonies grew more slowly and produced fewer queens. Solitary bee nests disappeared from the treated fields completely.
Many wild pollinators are declining and honeybees can’t pick up the slack. Managed colonies supplement the work of wild pollinators, not the other way round. Wild bees and other insects do most of the pollination and are actually more effective pollinators –two to three times better.
Studies from many countries have demonstrated the negative effects of commercial bees, leading to a decline in local bee populations through competition over floral resources. It was found where hives of honeybees were placed, the bumblebees disappeared almost entirely.
Honeybees are more interested in the nectar and don’t really want the pollen if they can avoid it; whereas wild bees are mostly pollen collectors, which is then taken back to their nests.
There is even a suggestion that wild flowers may be declining because they are not being effectively pollinated and therefore not reproducing.

All the above is condensed from original articles. If anyone wants a link to the more detailed originals, just ask. They won’t copy and paste from this blog.

Help with a Toad Patrol Needed

52 toads picked up, three squashed Friday at Copley Valley new road. If anyone knows of anyone who might be able to help please give them a hint, as it’s knackering on my own! No children please as the road is dangerous. Heartwarming to see the little characters (toads) marching away down the tunnel (it’s 2ft – 60cm diameter) after I place them at the entrance. Started 20.20 Fri. Mild and dry conditions.