Found this unusual colour morph of common toad crossing the lane to the pond.
It looks reminiscent of a brown version of the European green toad Bufo viridis. 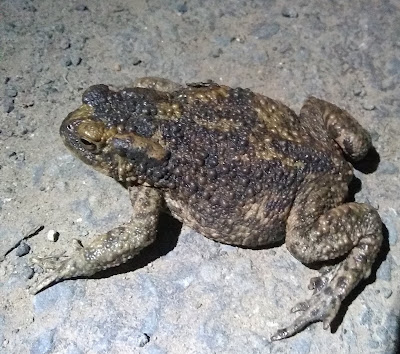 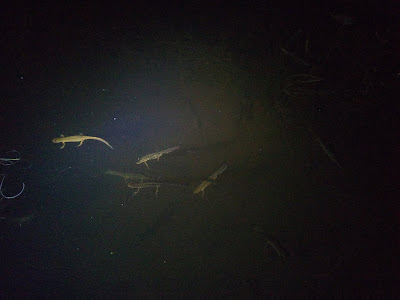 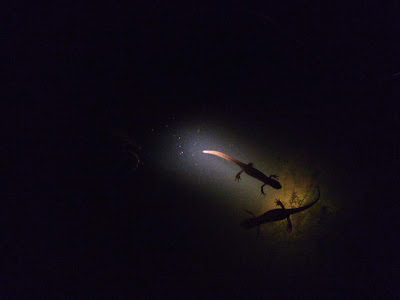 Meanwhile, the smooth newts are having a nocturnal ball at the moment,
floating around in the water column, snapping at daphnia and chasing each other.

Took a couple of photo’s on 23rd March on the phone of the cloud (Cirrus I think) – very high cloud, with the added bonus of a ‘Sun Dog’ (second 2 shots) showing to the left of the sun mid morning.
Not sure how it will show up on the blog but I’ll try.
Notice – no vapour trails !!
‘Click the photo’s to enlarge’ 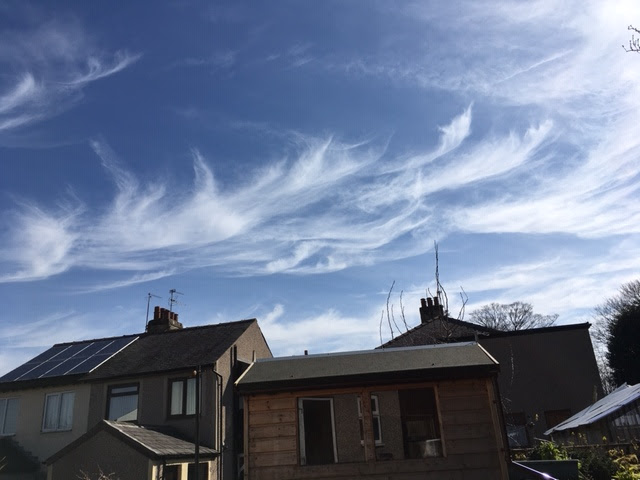 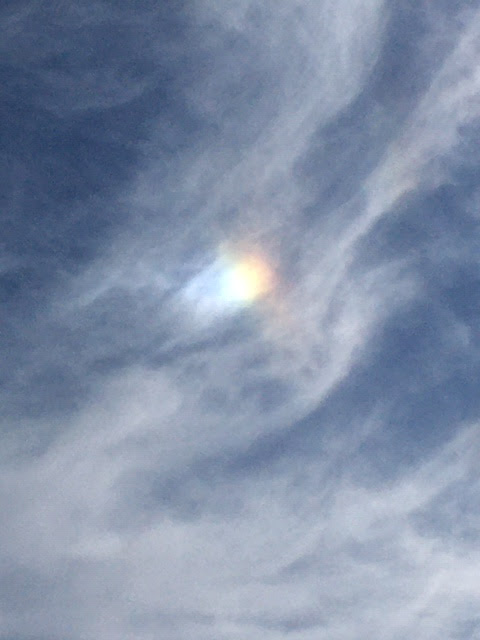 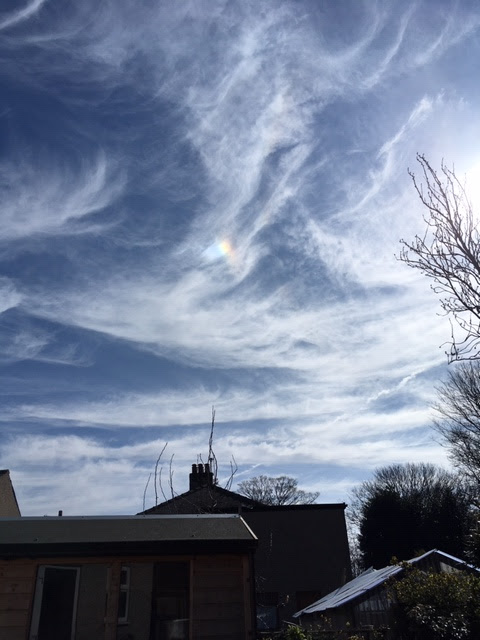 My son reported seeing lots of bats last night at Hollas Bridge.
When the new bridge was put in place it included built in concrete bat boxes.
Lots of flying insects yesterday so no surprise the bats were out.
jamieharrop2020-03-26T13:08:00+00:00March 26th, 2020|0 Comments

Jumping Spider – what I saw on my ‘daily exercise’ 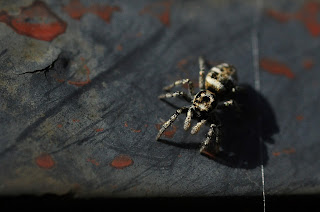 There were several zebra spiders Salticus scenicus running around in the sun on my allotment shed door this morning. This one is on the hinge. 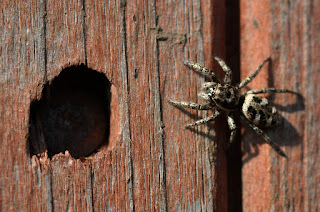 This one is about to inspect a nail hole 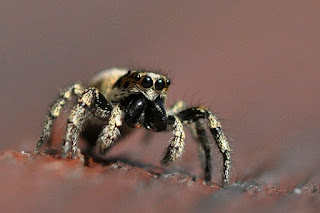 This is a male with his extra-large mandibles. Note the fangs folded underneath, like flick-knives. 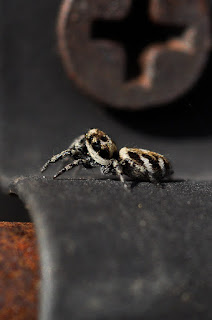 A typical pose, ready to jump 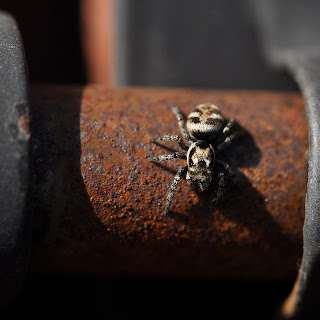 Hard to spot, but the four points of light on the dark stripes on top of the head are backwards-pointing eyes 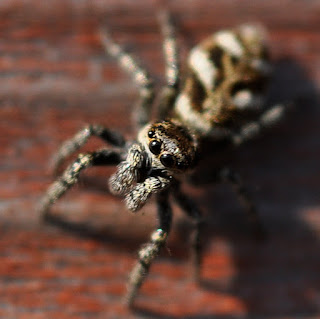 Sight hunters with excellent vision, this one seems to be fully aware of the camera lens.
Looking forward to seeing what these little chaps are up to if we get more sunny weather. Maybe I’ll be able to observe their ‘semaphore’ courtship displays.
Look out for them on sunny inside windowsills.
jamieharrop2020-03-25T14:46:00+00:00March 25th, 2020|0 Comments

Very pleased to report the restoration of the toad pond in Clifton was completed last Friday.
It had been empty for months due to the winter floods damaging the bank and letting all the water out.
Some toads appeared last Monday to an empty pond,
but from now on they have somewhere to breed again. 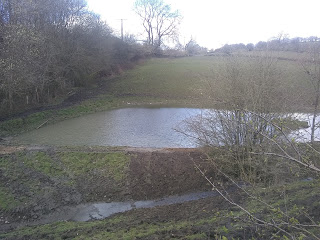 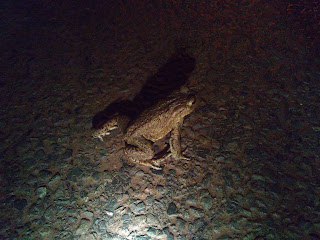 Quite a surprise to find this lizard in the grass near Scammonden.
Thanks to Dan R for the report and photo’s. 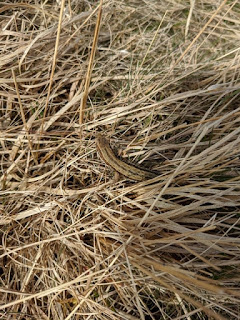 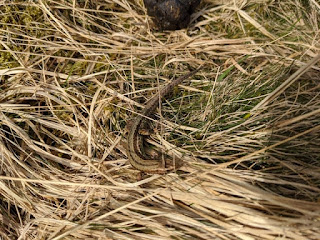 Due to the current virus pandemic the talks of 14th April, 12th May and 9th June have been cancelled.
We will review the situation in the first week of July with regard to the rest of the year’s programme.
The outside walks are also cancelled until such time as it seems reasonable to continue them.
It is in the same vein that the Social Dinner has been cancelled.
Please continue to add your sightings to the blog.
If you are not able to make posts please contact
calderdalewildlifeblog@gmail.com and request to be added.
We wish all members the best during this unsettling time.
jamieharrop2020-03-19T17:36:00+00:00March 19th, 2020|0 Comments

From Peachysteves post recently on 8th March…(thanks for the prompt).
I eventually got around to checking for both Cherry Plum and Blackthorn species on Shroggs Road reclaimed landfill site. There is a large flat, and very boggy grassland area, which is very good for lots insects in summer but not a lot visible in winter.

There is one large planted tree area adjacent to Brackenbed Lane and another banking of planted trees alongside Shroggs Road. The trees in both areas were planted around 1989. Our son and pupils of Lee Mount Junior School planted the trees on the banking in liaison, I think, with Calderdale’s Million Trees Initiative.

I found around 6 groups of Blackthorn, Prunus spinosa, all on the grassland side of the tree belt and looked for the green sepals between each petal along with the black twigs and sharp long thorns. the flowers are just starting to emerge on some plants whilst another group was in full flower. 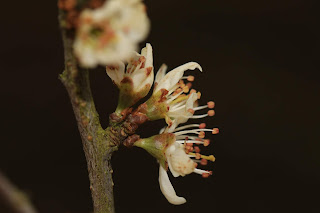 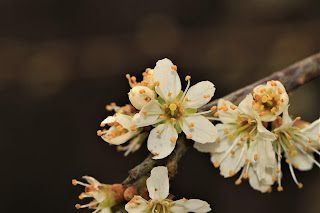 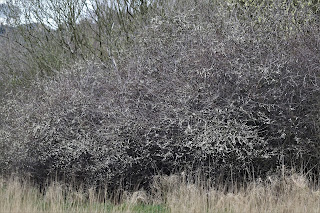 Below
Later in the morning I came across an isolated small tree on the same site, in flower, and carefully checked the twigs and flowers. I came to the conclusion this is probably the Cherry Plum – Prunus cerasifera
The flowers looked marginally larger than the Blackthorn. They were on green twigs and the sepals were curled back. Click on the images to enlarge. 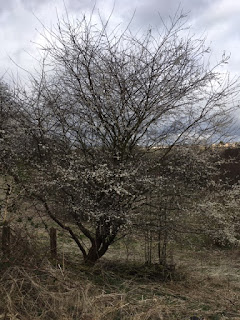 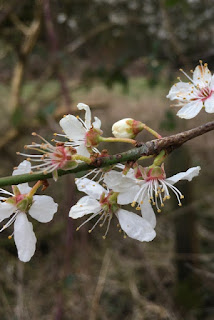 Quite a few Bumble Bees out this afternoon at the old Milner Royd Allotments and my first of the year.

Estimated 15 clumps of frogspawn in a pond on top of Crow Hill, Sowerby and 2 Fox Moth Caterpillars? on Aaron Hill. No spawn in the small ponds on Aaron Hill where I’ve seen it before although these have a tendency to dry out by early summer. 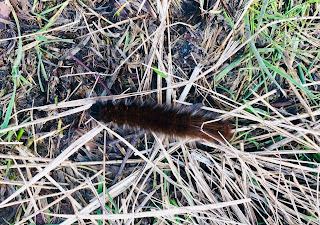 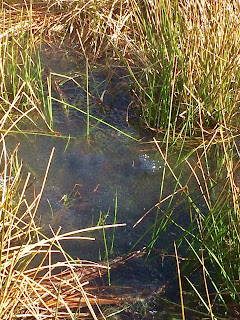