A Beetle but not as I thought it

A Beetle but not as I thought it

In May 2013 I posted to this blog my photo of what I assumed was a Bloody-Nosed beetle (BNB) Timarcha tenebricosa, which I saw at Blake Dean, Hardcastle Crags.

Following an article about this beetle in the YNU August edition of ‘The Naturalist’, there was also mention of the Small Bloody-Nosed beetle, T. goettingensis.

So I took another look at my photo and realised I had mis-identified and it is actually the Small BNB T. goettingensis.

I have had this confirmed by the Beetle recorder who said; “There is a record from Hebden Bridge, presumably the Craggs, dated 1879”.

I had no idea there were 2 such beetles to choose from but fascinated to learn this Small BNB has remained at Blake Dean for the last 137 years without showing itself to passers by!

BNB’s wing cases are fused, so they have to walk everywhere and are consequently sedentary. They produce noxious blood droplets when threatened. Food plant is bedstraw and cleavers. 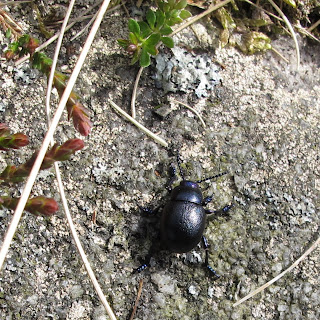