A trio of rare Grasses and a lost Rock Outcrop

A trio of rare Grasses and a lost Rock Outcrop

Walking in Hardcastle Crags on Saturday we were admiring the hazy effect of hundreds of Wood Melick flower heads, on the track side just above Gibson Mill. This is a fairly widespread grass in Calderdale.

I mentioned the much rarer Mountain Melick that we had been unable to find at Hardcastle Crags since the days of our late President, Frank Murgatroyd. He wrote in his Flora of the Halifax Parish that “It is very rare and known only in the Hebden valley on a calcareous outcrop, where it has persisted for many years”. However he was not able to find it for us on many visits since my time in the Society. Since we sadly lost him, several people have kept visiting the spot, but no sign of it was seen.
However, on Saturday 18th June, Annie Honjo found it! I persuaded Peachysteve and Philip Marshall to come and confirm it on Sunday, and they were satisfied it is Mountain Melick, Melica nutans. Charles Flynn also added his opinion that we had relocated it after seeing the photo.

So we are really pleased that it is still in existence there. The National Trust have kept the tree cover off the rocks for the sake of the special assemblage of plants that grows there. 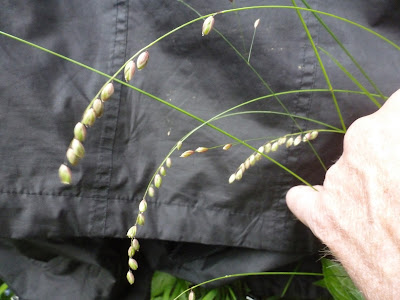 Mountain Melick, Melica nutans
Also on the Sunday I tried to lead the group to the other calcareous rock outcrop in the Colden Valley, but among the gloomy wet foliage (it had started to rain) I was unable to find the great boulder I had been to several times. Since then I’ve checked in Murgatroyd and he does list records for the Mountain Melick also being there on the Colden outcrop during the 19thC.
Last week Philip found a grass with no previous records in Calderdale. Growing in a crack at the bottom of a wall at Mytholmroyd, he identified Water Bent from his seat on the bus! That shows a thorough knowledge of grasses, much greater than mine.
Tonight I visited the new bridge in the Copley Valley. I thought I had seen some Sand Martins among the Swifts over the Calder. There was a handful of them. On the ground I noticed a few fine rosettes of the stiff, bristly Fern Grass, or Hard Poa, Catapodium rigidum, which we had seen there before the development started. They are on the bare area on the left before the bridge going in the Sowerby Bridge direction.