Amazing re-encounter with a bird by a ringer, from an email from BTO Demography Unit

Amazing re-encounter with a bird by a ringer, from an email from BTO Demography Unit

Ringer migration confirmed by a Blackcap

Back in September, we posted about the large numbers of Blackcaps that were moving through the central and western parts of the country. We were contacted recently with a fantastic story of a chance re-encounter between a member of the Brewood Ringing Group and one of these migrants.

Over the last 8 years I have been leading an Autumn ringing trip to the Parque Ambientale, in Vilamoura, Portugal with support from Vitor Encarnacao who heads up the Portuguese Ringing Scheme. Our trips have been successful on several levels and many British ringers have joined us over the years to expand their experience.

We have also controlled a number of birds from northern Europe, including Reed Warblers from Belgium, France, Germany and Sweden, and Bluethroats from France. On 06 October 2014 during this year’s trip, I extracted a male Blackcap from one of our standard mist nets and was very pleased, although not too surprised, to find that it was carrying a BTO ring. Back at the processing station, Dave Clifton (who has been an ever-present fixture on these trips) was doing his stint as the scribe. Having announced to the group what I had extracted, I began to process the bird – first reading out the ring number several times for accuracy. 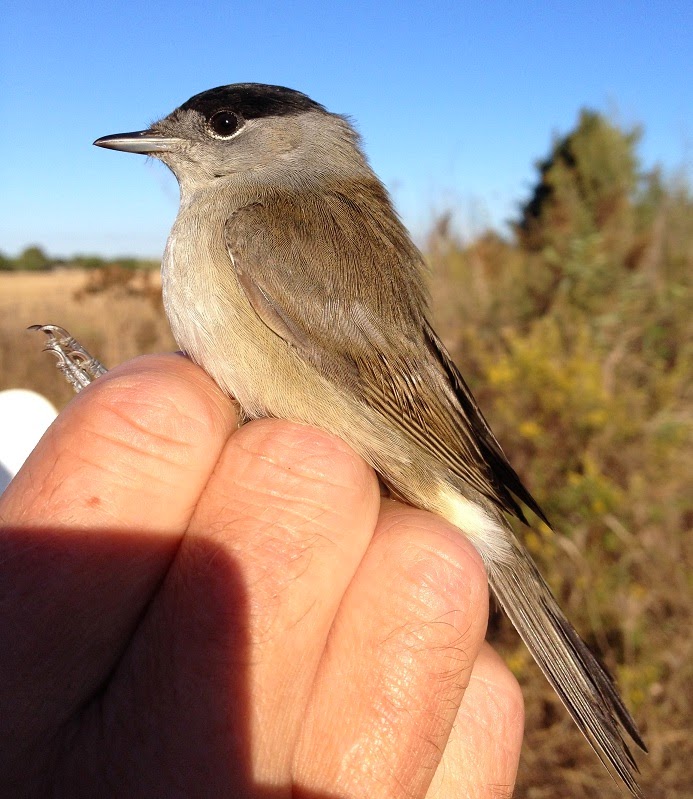 Dave went quiet. He quickly got onto the phone to his wife, who checked in his ringing book back home. Hey Presto!! The bird was indeed one (of only two Blackcaps ringed at the site) he had ringed at Duckley Plantation, on the north shore of Blithfield Reservoir, Staffordshire on 11th September 2014 – only a few weeks before we had left for Portugal!!