On 26th March we made our annual survey of  amphibians at Cromwell Bottom Local Nature Reserve.
Having the walk listed in the Calderdale Council’s Wildside booklet usually ensures a good group of children; Easter school holidays also helps bring them out.
We had a brilliant total of 19 people including four children plus two dogs.

The kids are so enthusiastic, it brings out the energy in us big kids.

Many thanks to the members of Cromwell Bottom Wildlife Group who attended the walk with us or stayed back in the cabin with the kettle on ready for our mid-day break, a welcome innovation.
They also lent us some lovely new pond-dipping equipment which saw good use.

CBWG had been called on to rescue some frogspawn from Lloyds Bank Copley Data Centre, where it looked like it was going to dry out. They had placed some of this in various ponds on the reserve. There was also plenty of naturally appearing frogspawn clumps, though I didn’t get a count of these. I’m relying on Allan, as he knows where the Copley spawn was put.

No adult newts were spotted despite much staring into ponds. We saw plenty last year on 28th March. However, when we got to Tip Pond, one of the boys, Dylan, made a sweep with his net and tipped the wet and weedy contents into one of the white trays being carried by an adult. What was at first thought to be a leech, then a small fish, turned out to be an immature newt, about 1.5 inches (4cm) long.

It had its four limbs (very filamentous) and still had its external feathery gills that newt larvae have. (See picture.) Annie commented on its similarity to a tiny Axalotl, which is after all, just a large amphibian. Dylan’s newt would not yet have left the pond it developed from the egg in. 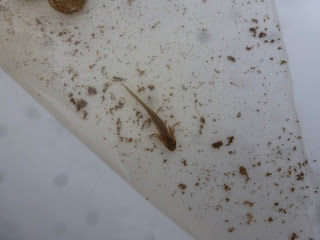 The species of newt that have been identified at Cromwell Botton NR are Smooth and Palmate, but no-one was prepared to have a stab at identifying this little one.

No frogs were seen, but when four us went to look at how the Sphagnum Bog had fared after the Boxing Day Floods, we found a dead Common Toad. I think it had possibly been crushed underfoot, as its tongue was  exposed, as when they are run over on the road. Another was spotted, very still, halted in mid-crawl and covered in white fly-ash.

At first we thought it had been poisoned by the alkaline ash and petrified, but I noticed its eyes were not covered, and it was slowly blinking occasionally. I took it to clear water at the nearby Wet Woodland and washed it, when after being photographed (see picture,) it swam away perhaps soon to find a mate. 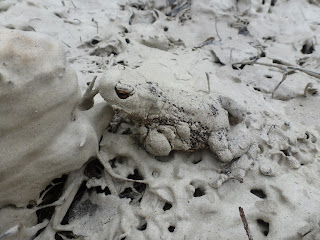 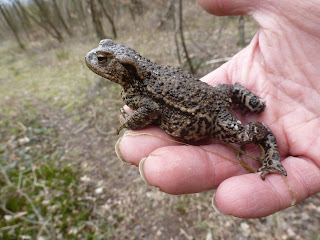 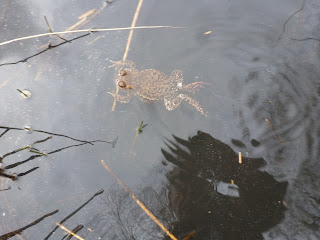 The floods had poured into the Sphagnum Bog via Pixie Wood, disturbing the fly ash, and covering everything in a thick white layer. Some of the “quaking bog” effect had returned, long remembered by local kids, now grown up, as the “Wibbly Wobbly”.

It was a very successful amphibian walk, with two species seen, and another seen to be present by its spawn.