Just been on the Ancient Tree Forum meet at Lowther Park, looking at the landscape which still retains the banking on which would have stood the Park Pale of 1283. Lovely trees, centuries old, and much wood-pasture being re-created.

Wood Pasture is thought now to have made up much of the English landscape in the time before man had a great influence on it. The traditional idea of squirrels being able to jump from Lands End to John O’ Groats without touching the ground is a myth, although modern tree planting seems to be trying its best to rewrite history.

Fungi are the driving force behind trees, some even say that trees are merely a support system for fungi! It seems that many fungi are latent within trees for decades and co-exist happily. Slight changes to the tree’s environment, or such a thing as branch loss, can stimulate them to ‘wake up’. Often when we see fungi erupting on trees, they haven’t ‘entered the tree’ through branch wounds but are actually finding their way out in order to spore. Co-existence with fungi is the norm for a tree.

If you can get this link it suggests that fungi micorrhizae are capitalists and compete with each other to corner the market in storing nitrogen, keeping trees short of the stuff and only releasing it in exchange for Carbon. It’s a jungle down there, if you will forgive the pun! 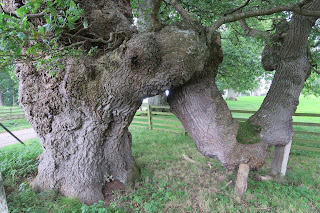