DEFRA has found the pathogenic fungus Cryphonectria parasitica in Sweet Chestnut Trees in Devon. Oak trees can get infected but they only suffer superficial damage (we hope) although they can spread the disease.

This is the same disease that arrived in America in 1904 on imported plants from Japan. In 40 years the disease had killed 5 billion American Chestnuts and the tree is now classed as ‘technically extinct’.

The hyphae of the fungus produce toxic compounds, including Oxalic Acid. This lowers the PH of the affected tissue from normal 5.5 to 2.8 which is toxic to plant cells.

There are good populations of Sweet Chestnut – Castanea sativa in England, and many centuries old trees in the North of England. Below is a photo of 3 of them at Levens Park, near the Lake District.

Let’s hope the containment notices stop the spread of this disease. 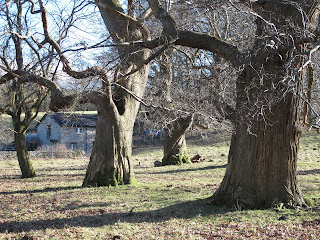