Ash Die-Back disease seems now to have established over a wide area of Park woodland and other areas in Todmorden.

It is mainly visible on saplings a few years old, where the upper leaves have died and gone black and drooping like an umbrella; the upper stems looking blotchy and either dead or discoloured. On some, just the side branches have died and the fungi then spreads both up and down the stem, creating characteristic diamond shaped lesions on the bark.

The asexual stage attacks the bark and encircles twigs and branches, cutting off sap flow. The sexual stage grows during Summer on the previous years fallen leaves and spreads the spores.

The disease is easy to spot at the moment as it stands out amongst otherwise green and healthy ash saplings. It would be interesting to know if anyone has seen signs of the disease from elsewhere in the valley, although there is little that can be done to prevent the spread.

I have seen mature trees affected the otherside of Whalley so expect more signs next year.

Forestry Commission don’t visit to confirm as the disease is now so widespread. 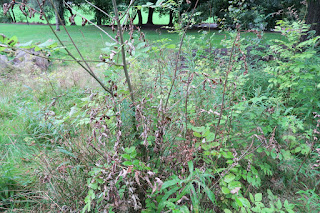 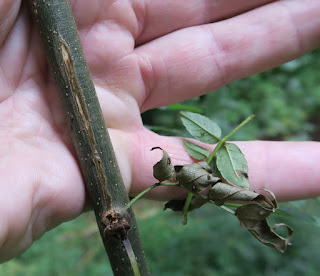