The number of the Autumn crocus, Crocus nudiflorus, blossoms in St John’s graveyard at Bradshaw is 129. This one of my best totals for this site. The hot dry summer has not had any visible effect on these plants.

If anyone wants to see them, they are on the downhill side of Bradshaw Churchyard, along the perimeter wall under a row of trees.

This was taken last year of the colony at Strines Beck, Bradshaw/Holdsworth,  by Annie Honjo.  Julian Birkhead another of our members is in the picture. 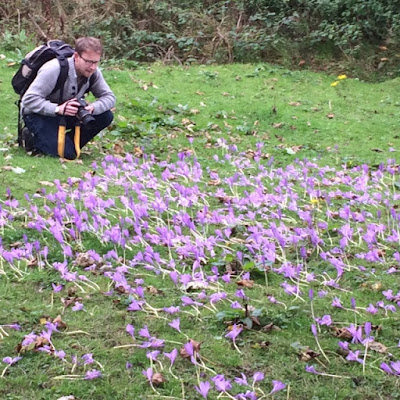 Report of the Walk on 22nd September: Ten members attended plus two dogs.
We first went to the colony on the left bank of the Calder, near the junior rugby pitches at Copley. I was surprised to be shown by Peachysteve several odd crocuses and one clump actually on the playing fields! Those on the riverbank under the young oaks were blooming, but somewhat flattened by last week’s wind and rain.
Secondly we went to the right bank of the Calder opposite the above spot, where Peachysteve recently found several patches of the leaves in spring. These also were flowering, but sparsely, showing it’s much better to survey the extent of the colonies in spring, when the foliage comes up.
Next we drove along to Kebroyd and looked at the colony at Grassy bottom, by the weir, on the left bank of the Ryburn, among the beeches. Again there wasn’t a great show, but the site is intact. There were some convenient fallen trunks here so we sat and had our packed lunches.
We made our way back up to the Oldham Rd through Ripponden via the football pitch and explored up Ryburn Lane, where all but Peachysteve had never been before. At the top, just after it ceases being a tarmac lane and changes to a bridleway, Peachysteve wanted to show us an immense oak, approximately 5ft diameter in its short trunk, with several large ascending smaller trunks. Philip Marshall thinks it is possibly the oldest oak in Calderdale. The “Ryburn Lane Oak” we decided it should be known as, and that it is imperative that it should be recorded and carefully protected.
After that we walked back to Grassy Bottom, via a single crocus at a small colony on the grass verge outside 112 Oldham Rd.,  to the Old Parade Ground, now overgrown with youngish trees, where there is another Crocus colony on the left river bank approximately 60 paces down stream from the footbridge. We confirmed that it is still there and saw a few bedraggled blooms.
Finally we all shared cars up to Dean Lane at Sowerby to see the colony in the field there, not far from Ryburn High School playing fields. These were the only undamaged blooms, and showed a large swathe of purple among the grass.
Other notable wildlife were a Little Egret at Hollas Bridge on the Calder, a beautiful white tufted caterpillar at Grassy Bottom, black in between a few segments, and with a pastel pink appendage sticking up near the rear, now identified on www.wildlifeinsight.com as

and a Hedgehog, sadly a fatality on the main road at Kebroyd.   Also a single plant of Rustyback Fern on a garden wall along the main road, the only one known of for miles, and fungi were coming up in quantity and variety. The Ryburn Lane Oak had a huge, dripping beefsteak fungus on it, as well as an Artists Bracket.
SB