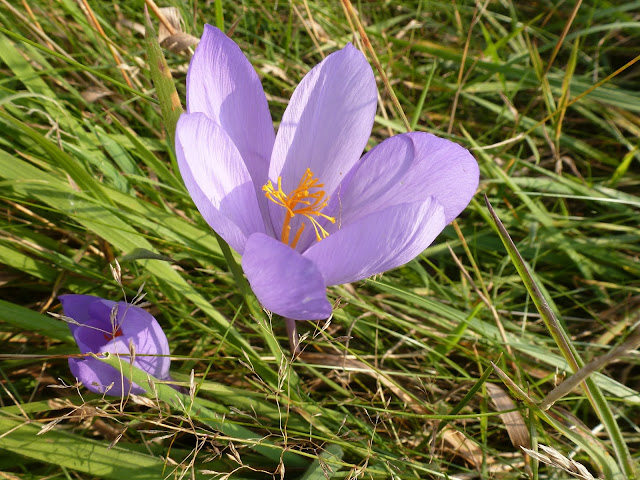 These are widespread but elusive in Calderdale. My good friend Howard Owen has just spotted a new colony in a field off Green Lane in Soyland, though this might be the one mentioned in the old records as being “Behind Making Place, Soyland”.
The previous survey in 1950 had 23 sites in Calderdale, but we now have a list of 42. Sadly this is partly because some of the biggest colonies are much reduced and fragmented.
It was brought from the Pyrenees in the middle ages it seems, possibly as a source of saffron, but this isn’t directly documented. There is a possible reference to them in a medieval will to “my heads of crocuses” which indicates a high value. Crocus vernus, another European crocus which flowers in spring has been mentioned as a source of saffron, though the true Saffron Crocus is Crocus sativa. This is still cultivated in Norfolk. See “Norfolk Saffron” on line. Saffron Crocus is probably not viable as a crop in the Pennines, though Crocus nudiflorus, coming from the plateux of the Pyrenees, does well. It has much smaller “threads” though, (the stigma that are the saffron.)
Many of the spots we see it are close to places with St. John in the name, and some are near Holdsworth House, Bradshaw, where there is a Maltese Cross on the gable, showing a connection with the Knights of St. John, the Knights Hospitallers.
They grow in many different places, often in fields, and often on river banks well away from gardens. They thrive at 300 metres at Cold Edge near the Ovenden Wind Farm, and right down near Cromwell Bottom Nature reserve, near Park Nook Lock, on the bank of the Calder. Strangely, all the river bank sites are on the left banks – on the Calder, the Ryburn and the Hebble. It is even found among mature deciduous trees. It is fascinating to think that they were probably there before the trees.
There is a longer version of this and a list of sites in my booklet “The Mystery of the Autumn Crocus” (2010) available now. (See panel on the left.) Also from me personally £5.00
or £6.00 including postage. Steve.blacksmith@gmail.com. The £5.00 goes to Halifax Scientific Society. A copy comes free with membership which is £15.00 a year.
N.B. there is a cofusion-species in the Meadow Saffron, Colchicum autumnale, which has nothing to do with saffron, and is poisonous. It’s a lily-relative and therefore has a flower full of stamens, six in number, whereas the crocuses have just three club-shaped stamens around the feathery stigma. Catch them on a sunny day to see this easily. Beware that garden centres sell Colchicum bulbs as “Autumn Crocus”. They do have a superficial resemblance. 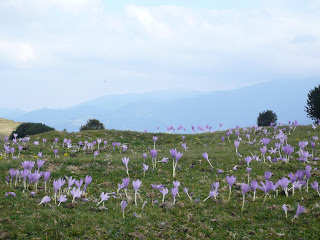 Autumn Crocuses on the plateau above Foix in the Ariege district of the French Pyrenees. Free-range cattle with cow-bells and horses keep the grass short but leave the crocuses.