I just had a call from Sim at Cold Edge to let me know that the crocus up there are excelling themselves this year. He says they are a sheet of purple. They are in the field on the left going up below Withens Gap Farm and visible from the road. Please consider local residents if parking near there. 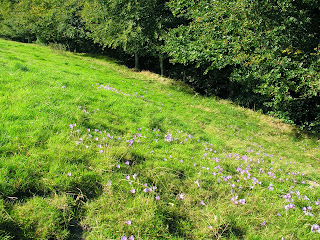 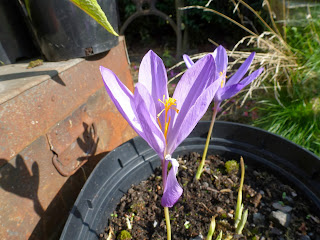 3 stamens below the Feathery Stigmas
If you think you’ve found Autumn Crocus, especially if it’s in a garden, check that it has 3 stamens ( the straight club-shaped organs below the feathery stigmas, )
If it has six it will be Meadow Saffron Colchicum autumnale, a lily-relative sold by garden centres as “Autumn Crocus”, which is poisonous and not to be used for saffron.
There are 37  known sites where the true Autumn Crocus grows, mostly in fields and along riversides in Calderdale.
They are spread between Elland, along the Ryburn valley,  North Halifax, the mid-Calder area, especially Luddenden Dean, and then, after what appears to be a gap around Hebden Bridge, they pop up again at Todmorden. Many were re-found  or newly-discovered recently with the help of HSS survey volunteers and members of the public.
We’ve lost some at Brearley, near the river Calder, which could still be there; also there are several other missing patches.
The 2010 booklet, with history of the plant and map-references to sites, is available from Halifax Scientific Society. ( See panel at the top.)
Any better photos than mine would be very welcome – I could put them on this blog.