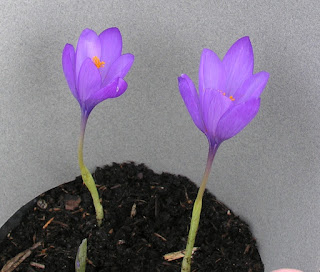 We visited 9 sites. Most of which held good quantities, but mostly flattened by the wind and rain:
Dean Lane
Deerplay Farm ( none found – never been refound here recently.)
Kebroyd river bank (Grassy Bottom)
Turn Lee House, Cottonstones.
Dog Kennel Lane (near Turn Lee House) – none showing here – everything bitten well off by Texel sheep.
Shaw Edge Pasture, Soyland
Soyland – top of Foxen Lane
Upper Cockroft House, Rishworth
Still no clue where Goat House is, where a colony is said to bloom each year. Must research it at the library. Think the house has been renamed.

There is still about 2 weeks of the flowering period remaining this year.

The owner of Turn Lee House was happy as usual to let us in his garden, (there were 3 of us.) where we were able to see the crocus blooming alongside the misnamed “Autumn Crocus”, Colchicum autumnale, the one in the lily family with the lily’s 6 stamens unlike the crocus’s 3.
He showed one of our party inside his house to see the timbers which go back to wattle and daub construction times. The crocus is often associated with these mediaeval houses.

In the Halifax (Copley) area on the Calder banks at the Junior Sports Field, among the young oaks, there were plenty in the usual spots, but no blooms in the area where much crocus foliage comes up in spring, east of the flowering colonies.

You see this also at Kebroyd, where there is a non-flowering colony 60 paces downstream from the footbridge, on the edge of the Ryburn. (The main patches are up stream, under beeches and other trees, on the left bank, just below the weir. – left bank looking down stream.)
.
We kept a bird list for the trip: Grey wagtail, pied wagtail, dipper, goosander, kestrel and kingfisher being among them. 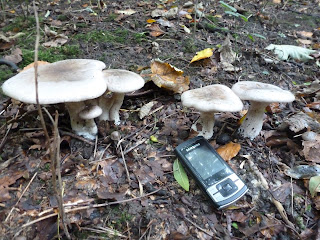