jamieharrop2019-06-27T22:26:00+01:00June 27th, 2019|0 Comments
A rescue operation took place on March 21st after demolition work began on the disused site adjacent to the old Rose & Crown on Halifax Road Todmorden. There were a lot of interesting plants on this site and I received permission from the site manager to retrieve any plants I wanted before the whole site was demolished. Early in March, a Bee Orchid (which had flowered two years previously) produced a rosette of leaves and Portia, of the Upper Calder Wildlife Network, safely unearthed the plant along with the fungus on which it depends for its growth. The orchid then took up residence on my balcony in a pot with plenty of the original earth and produced its first flower on June 6th. 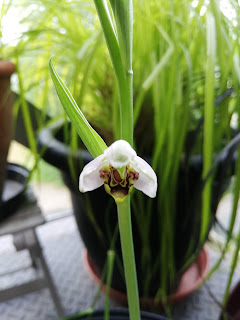 Now, at the end of June, the first flowers have faded but the buds higher up the stem continue to open. The entire plant measures 55cm/21.5″ high. A number of Common Spotted and hybrid orchids were also rescued from the site and are now safe on Peachysteve’s land. Hugh Firman has requested that a wildflower meadow be incorporated into the plans for the new development on the site in which case it may be possible to return the Bee Orchid to its original habitat. It may now be a question of ‘watch this space’! 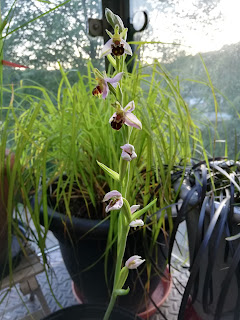 Multiple blooms now but the lower ones are fading