Beech wood and black lines–what are they?

Beech wood and black lines–what are they?

A recently sawn Beech trunk that was dead and had just collapsed, shows curious black lines on its cross section. In my photo they are on the outer section and resemble a map of some unknown continent.

What we are seeing here is the demarcation between mycelia of different species of fungi. These mycelia don’t like competition so where they meet a battle begins; each one trying to outdo the other.

A  stalemate develops and these ink lines are the defensive/offensive chemical barriers that form where they meet. High concentrations of chemicals, such as Phenols, are formed and actually increase decay resistance in the wood at this zone.

Look how the lines stop abruptly at the inner edge towards the centre of the trunk. The mycelia (in this case I think Turkey Tail) are only able to grow in the drier and dead outer zone.

Also notice at the base of the in situ broken stump there has grown a separate young Beech. It is quite independent of the dead tree and looks to have grown as a result of the trunk sending out aerial roots into its own rich decay compost. You can see the splaying roots connecting with the parent tree near the base.
It could have survived to form a new tree but all has now been cut and logged. But it does illustrate survival strategy and sometimes we don’t see it or allow for it. Trees contain innumerable fungal spores right from being a sapling and remain dormant. They cannot develop in the anaerobic and high moisture content, particularly the sapwood.

Dormancy can last for decades or centuries. It is only when conditions change, such as a branch breaking off, that fungi are able to develop as the surrounding wood dries and oxygen is allowed in.

It can be said most fungi don’t invade a tree, they actually spring to life and grow out.
A chemical barrier is then formed around the growing mycelia, walling it off from progressing further into the tree. 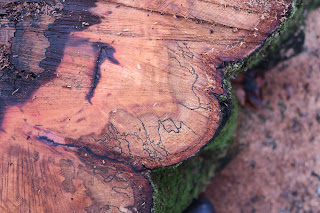 New independent Beech growing from base of parent stump 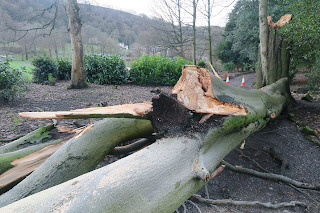