I saw this Yellow Brain fungus Tremella mesenterica, near Foulridge in November. It was growing on a dead Ash twig.

It is very common and only seen on dead wood. I thought it actually fed on dead wood but apparently it feeds on crust fungi, which are themselves feeding on the wood. It is therefore classed as parasitic and not saprobic.

Note the very small fly which is feeding on the ‘brain’! 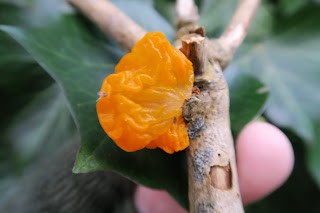