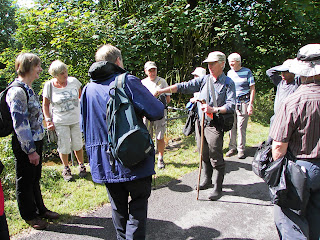 No, the grass is the graceful Barren Brome (Bromus sterilis), quite scarce, just in isolated patches, often along canals. Giant Fescue hasn’t been found at Cromwell Bottom as far as I know.
Many other grasses were seen at their best, the predominant one being False Oat Grass, as everywhere on unmanaged grassland. The Flote-grass in the Top Pond on Tag Loop is Glaucous Sweet-grass(Glyceria declinata), the rarer of the two we see in Calderdale. The Reed canary Grass (Glyceria maxima),so common everywhere in water, was in its brief moment of glory with its new shiny flower-heads waving in the breeze.
The fern Bruce photoed is Black Spleenwort, Asplenium adiantum-nigrum, known in the early 1990s only at Ganny Lock, Brighouse, but now spreading all over on walls, along with other rarer Asplenium species.
The Flowering Rush, Butomus umbellatus, the 4th picture down, was a surprise to me, as I’ve only seen it in ornamental ponds before, but R.Goulder does list it in Calderdale canals in his article “Aquatic Plants in Yorkshire Canals” in the April edition of The Naturalist. (Available in Halifax Scientific Society Library.)