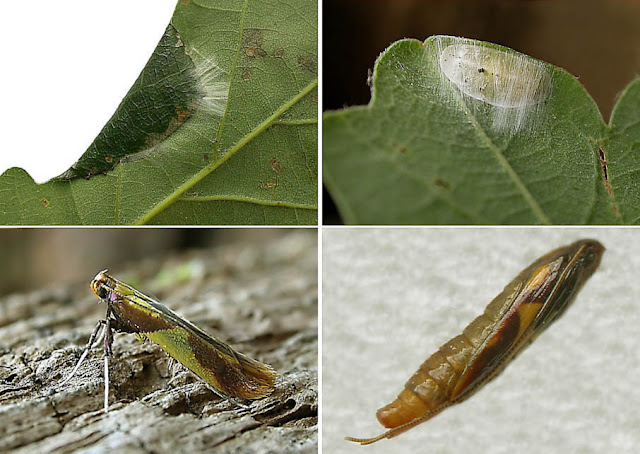 I found the larva of this species on Aug.18th last year on a HSS walk to Hardcastle Crags with Steve, Bruce et al. It was found feeding within an oak leaf in a folded lobe after initially mining the leaf. After taking it home to rear through, it rapidly spun a lobe over whenever it was introduced to fresh leaves (top left).
3 weeks later after carefully tending to my charge and  providing new leaves whenever necessary, it eventually spun a neat cocoon to pupate in protected by a flimsier outer cocoon (top right).
After allowing a couple of weeks for the pupal case to harden it was carefully removed from the cocoons and transferred to a Tupperware box ready to spend the winter in the cooler environs of the garage.
It was brought indoors on Apr.4th this year and a few days ago the pupa began to colour up nicely suggesting that emergence was imminent (bottom right) and sure enough a couple of days later the adult emerged yesterday. It’s a scarcely recorded species in Yorkshire due to it’s size and also it’s confusion with a closely related species with which it can be very difficult to be separated from.