Conifers in the Crags, our monthly walk – 27th February

Conifers in the Crags, our monthly walk – 27th February

jamieharrop2016-02-28T19:28:00+00:00February 28th, 2016|0 Comments
Eight people turned out for the walk to Hardcastle Crags, near Hebden Bridge, West Yorkshire.
Peachysteve and myself as joint leaders, plus, Emma, Annie, Stella, Alison, Oliver and Am.
Plus four dogs, Basil, Lacey, Meg and Tig. 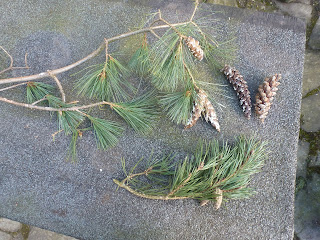 Our best achievement (for me) was to locate and get to know the Weymouth Pines near Walshaw Bridge.
Pictured above, it is the one with banana-shaped cones,beautifully spotted with white resin. It has soft, blue-green needles in bunches of five. Compare with the Scots pine at the bottom.
Pinus strobus, named after the British collector, Weymouth, but from Eastern USA, where it is known as Eastern White Pine among other things.
Scots Pine is P.sylvestris. It is easily rcognised from a distance by its reddish bark on the branches and sometimes trunk. Its needles are in twos, and vary from bluish-green to deep green on different trees.
Of course we looked at the three Douglas Firs at the Weymouth Pine site, but I forgot to photograph them.
We couldn’t locate the Lodgepole Pines, P. contorta, which are supposed to be there.
So I’m still not familiar with those. 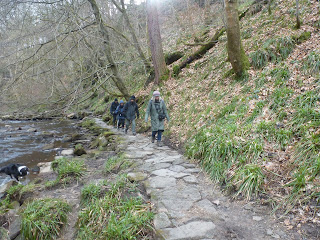 Part of the party coming along Hebden Water. 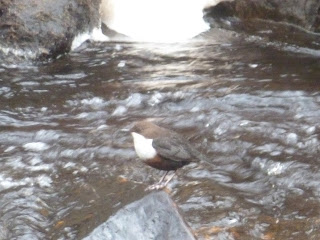 A poor picture of a Dipper, our Society’s emblem.
We saw few other birds. 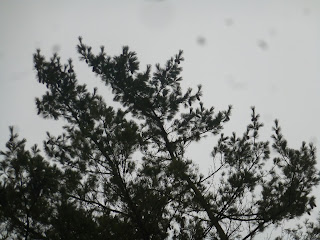 Weymouth Pine and its distinctive style of “handwriting” against the sky. 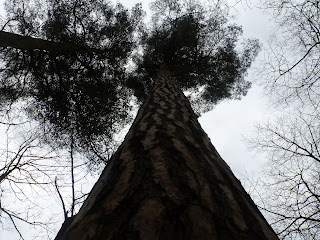 Looking up the trunk of one of the most massive Scots Pines on the river bank between Midgehole and Gibson Mill. Probably the largest living thing in Calderdale.
s
Other conifers we saw in the Crags were Yew (Taxus baccata) Norway spruce (Picea abies), Sitka Spruce  (Picea sitchensis) and the two larches, European and Japanese, with their distinctive cones (the Japanese with outcurving scales – the European with straight scales,) plus several that were hybrids, with the cones showing various degrees of out-curving. Austrian Black Pine, P. nigra, is quite frequent through the woods. There is a beautiful Hemlock, Tsuga heterophylla, at Hebden Hey, the Scout Headquarters, but we didn’t have time to cross the valley to see it. A couple of Lawson’s Cypresses Chamaecyparis lawsoniana, had been sawn off near a landslide on the private side of the valley near Hebden Hey.
The Deodor, or Indian Cedar Cedrus deodora, which was in the Lodge garden until fairly recently, has been felled. And the couple Cedars of Lebanon ( I found mentioned as being in the Crags in an old press cutting in our archives,)  I have never known to be there.
Thanks to Peachysteve for his encyclopaedic memory, his energy ferreting around for the larch cones, and his constant stream of moss names, three species of which he has decided to learn per day, with the help of the BBS Key and the confirmation of other Bryologists he contacts on I-spot.
He is concentrating on the common names.
We also looked for the Alternate-leaved Golden Saxifrage in the one site it is known, where  we relocated it after many decades last February, and it is still doing well.
A plant of Water Figwort was seen. There were signs of deer and rabbits. Meg walked around with a dead rabbit in her mouth for a while. (Meg is a black labrador 🙂