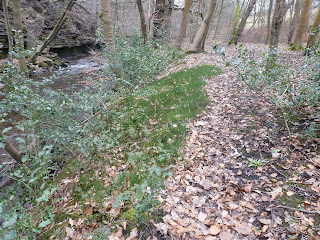 The Crocus in question is the Autumn Crocus Crocus nudiflorus. Spring is a good time to search for the patches, as the leaves that come up then are often more prominent than the blooms. Calderdale is particularly well endowed with it, though it is still elusive. This is a patch of leaves that hasn’t produced a bloom in autumn in the three years since I found it. It’s on the edge of the Ryburn stream, on the left bank, 69 paces down from the footbridge at Kebroyd. The leaves are grass-like, but have a pale central stripe.
I’ve produced a booklet for the Halifax Scientific Society  – “The Mystery of the Autumn Crocus”. 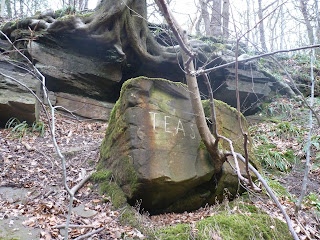 Old farmsteads around Calderdale often bear long-lapsed invitations to “Teas”, often on the stone slab roof, but I’ve not noticed this one before on a rock by the footbridge at Kebroyd. Looks like there was an arrow underneath the sign. 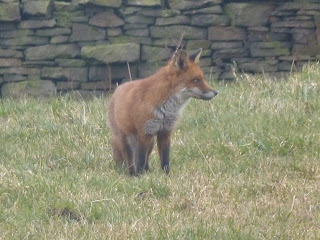 This Red Fox was hunting in a field, where it might have found worms or small mammals, but it didn’t seem to eat anything. It was midday ! Must get a proper camera with manual focus. 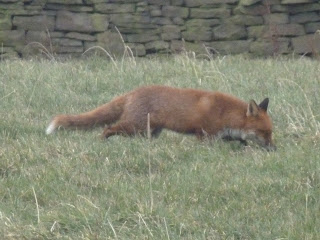 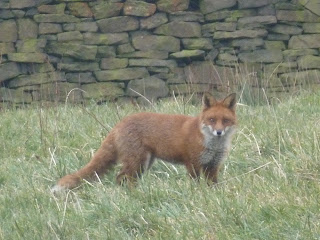 The next two are of Rough Hey Wood, near the old railway track to Ripponden/ Rishworth.
They show how holly Ilex aquifolium is colonising rapidly under the oaks Quercus petraea and sycamores Acer pseudoplatanus, as can also be seen in Park Wood, Elland and other places. I think this is just re- balancing of the normal situation, where holly makes a secondary layer. Being evergreen, it can get the sun’s energy before the deciduous trees leaf out.
It was probably removed centuries ago to feed stock in winter (they eat it when it’s crushed) and to create “greenwoods” where grass was the ground cover, which was grazed. Ref. the title of the poem “Under Milk Wood”. Greenwood as a surname was originally confined to Calderdale. 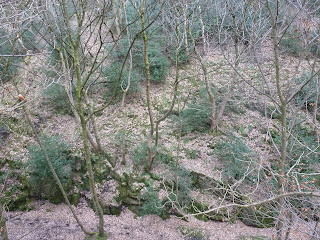 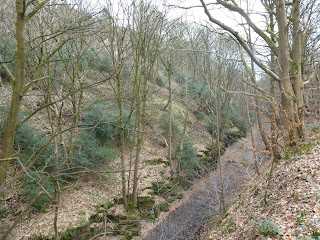 For fungi seen on the walk see the Calderdale Fungi blog.