jamieharrop2018-11-28T22:13:00+00:00November 28th, 2018|0 Comments
The walk in the programme was to start at Ogden Water and thread through the old lanes and secluded footpaths to Mixenden Reservoir, then back through the abandoned farmland and across Ogden Golf Course public footpath to Ogden Water. However the weather was a little moist, though very mild for December, and only two joined me. One of those was Meg the black Lab. So Peachy Steve and I made up our own walk and went to see if we could re-find the clubmosses on Ogden Moor we saw a few years ago on a tip-off from a Yorkshire Fern group member.
We weren’t lucky with the clubmossses (we were looking for two species growing closely together), but we did see this Orange Peel Fungus. Aleuria aurantica
Birds: Long-tailed Tits, Three Red grouse, Snipe, and a couple of  LBJs (little brown jobs) in the mist on the moors, probably Meadow Pipits. 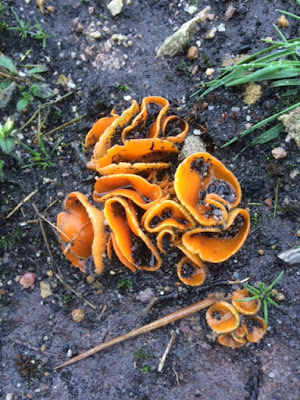 The woods at Ogden Water and Mixenden Reservoir are plantations made on abandoned farmland. Their establishment was as a result of suggestions by a group of people in the early 20thC including our President, William B Crump. I have a booklet produced to promote the idea, giving statistics, advantages, suggestions for species, quite a long and detailed document. One of the main worries about making the investment was that trees would not survive the air pollution as by all accounts  palls of smoke hung over Halifax, Bradford and Keighley in those days. The opinion was that Ogden and Mixenden were far enough away that the trees would not be affected, and it seems they proved to be so. It was claimed that the main advantage of having trees growing there was so that Halifax Corporation could profit from the timber when they grew to harvestable size; no mention of visual amenity or biodiversity increase! Seems it was a different world then, unless the promoters knew how to make the eyes of the people on the Corporation light up with £££ signs!
—————————-
Back in Halifax, I have been finding very large and broad Candlesnuff Fungus Xylaria hypoxylon, bigger than I remember it usually being. I’ve seen it on dead twigs at the base of a privet hedge, and on dead raspberry canes. There is another small, slender species worth looking for  that can be found sometimes on old beechmast on the ground. 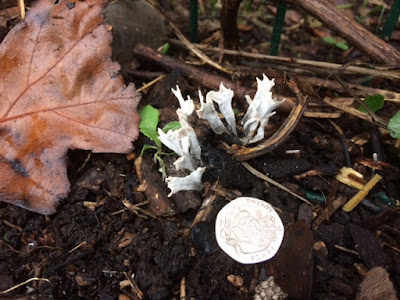 A “giant” form of Candlesnuff  (Xylaria)
Growing at the base of a privet hedge (Ligustrum) at St Augustines Community Centre, Halifax, yesterday. 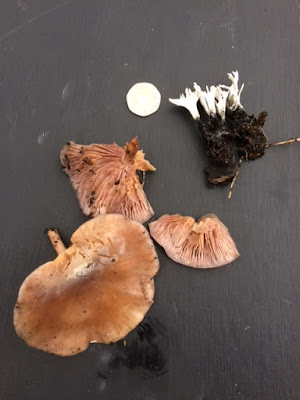 I collected a little,leaving plenty. Also these Blewits (Wood Blewits?) smelling nicely of aniseed, but a bit too mature and maggoty to cook. These grew in the middle of West Central Halifax.