jamieharrop2020-05-14T19:26:00+01:00May 14th, 2020|0 Comments
Has anyone ever found a self-seeded Lime (Tilia) sapling?
I am wondering if our changing climate may be encouraging germination.
All Lime trees in the valley will have been planted but the other day I saw two saplings in separate places which appear to be self-seeded, one of  which I think is Common Lime (Tilia x europaea).
The other with the heart shaped base leaf and stem dieback could be a Small-Leaved Lime (Tilia cordata).
Lime trees need long hot summers to set viable seed and the genus is on the northern edge of its range in the UK.
I have never seen a self-seeded one anywhere.
The Flora of Cumbria says about Small-Leaved Lime in the Lake District
“The individual trees can fairly be described as potentially immortal.
The massive bases have been dated by C.D. Pigott as up to 2,300 years old.
Pigott has demonstrated that most of these old ‘bases’ are of root tissue rather than shoot.
When trees fall, they sprout freely from the base and if the original trunk remains partly rooted,
shoots grow up from the crown and may eventually root and form individual trees.”
It was also shown that Cumbrian populations of Tilia cordata only produce viable seed in exceptionally warm years and the trees must be considered relicts from the post-glacial warm period, possibly even from 3,000 BC.
Tilia x europaea ? 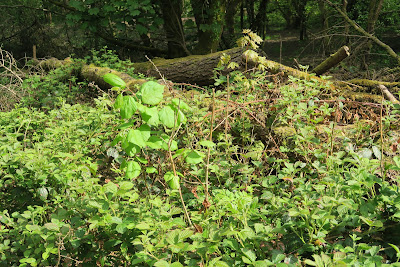 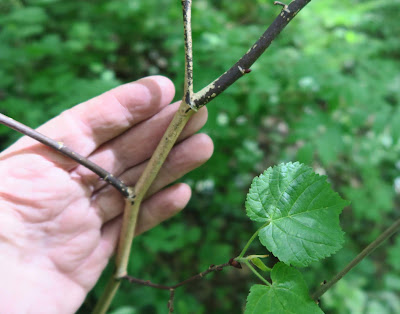