Every walk becomes a fungus foray in November

Every walk becomes a fungus foray in November 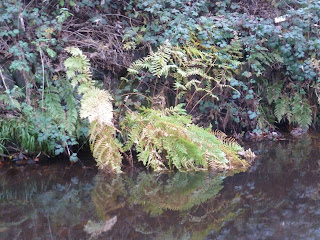 We were on a Mammal Tracks and Signs walk but were distracted on seeing these Royal ferns along the Ryburn. Frank Murgatroyd wrote about them in this area but never confided exactly where they were. I think these are probably those (about 12 plants, just above the bowling green, on the left bank.) 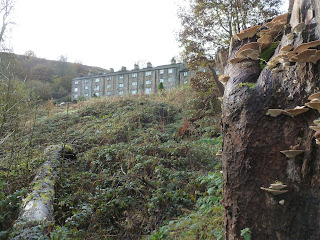 A view near Rishworth. Unidentified brackets on a Sycamore stump 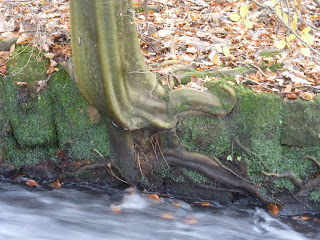 Impressively muscular roots on a beech. These trees are invading the oakwood in Turner Clough which is unwelcome, but interesting that they are really only the first generation of self-sown beeches, spreading from the 19thC plantations of which we have many in Calderdale. They were planted for timber for furniture and mill equipment, we are told, but apparently never much exploited for this, if at all. 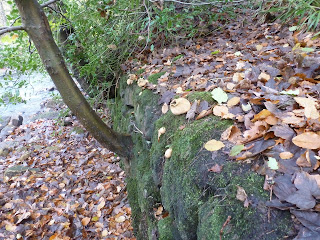 Another self-sown beech. On this walk we saw several growing out of walls like this. Some animal or bird could be involved in their germination, by storing them away then not eating them. Coal Tits and Nuthatches do this a lot. There is a group of fine Puffballs along the wall top. More fascinating fungi just added to the Mycology blog (tab above.) 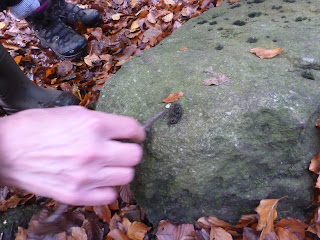 The only sign of a mammal we found ! This dropping on a rock in the path was not foul-smelling, but even so, could not definitely to be confirmed as an Otter spraint as it wasn’t very fresh. Our friends from the Yorkshire Mammal Group have promised to get back to us after closer examination. They took only a small part of it, as whatever animal made it left it there for a purpose – to mark its territory or pass messages to others of its species 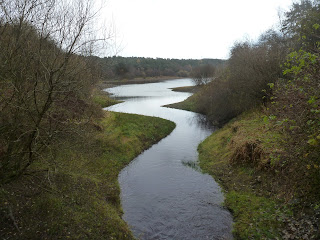 I took a visit to Ogden reservoir as I was passing last Wednesday. No Pintails; they had left, but found the interesting purple jelly organism (see the Mycology Blog.) This is the inlet from Skirden Clough 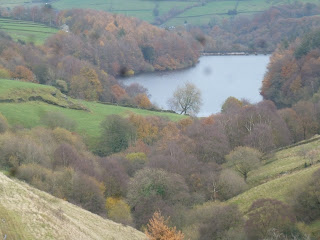 View of Ryburn Res from Baiting Res embankment.
We really appreciate these views of sombre autumn colours in dim light; they smoulder rather than flare out in fiery colours. (I know I have bits in my camera – got to decide between trying to get it cleaned or buy a new one.)
From this vantage point we noticed parties of starlings coming in and joining into one great feeding flock in the fields. We estimated about 1000 birds. We hung around till nearly dark down at Ryburn Res but didn’t see a murmuration, though did see large flocks of finches, Fieldfares, and corvids coming in.
Earlier we found the feathers of a Starling in the snow up at Whiteholme Res. The raptor that had plucked and eaten it had left the upper and lower mandibles of its prey’s beak behind, as well as its feathers.