First record of a snake skin being picked up in Calderdale – but probably not a native snake.

First record of a snake skin being picked up in Calderdale – but probably not a native snake.

jamieharrop2013-12-15T01:48:00+00:00December 15th, 2013|0 Comments
Readers may remember a while back I posted a picture (below) of a skin a snake had sloughed at Ogden, which was passed on to Hugh Firman who kindly passed it on to me. I sent it to Matt Wilson, a Herpetologist with Manchester Museum, but his disappointing verdict is below.
At least one exotic snake has been photographed by a golfer on the course there. (an American Pine Snake I believe.)
EMAIL FROM MATT.
Hi Steve,
“I received the snake skin in the post today and I’ve had a chance to have a close look at it. It is very difficult to tell because there is only a small part intact and this is around the ventral scales which doesn’t give too much to go on.
However, it is certainly not an adder, nor do I think it is a grass snake. Adders have very obvious keels on their scales when examined closely and so usually do grass snakes. There is a small chance it could be grass snake because looking at some skins I have from Yorkshire show that not all of the scales are keeled, particular those surrounding the larger belly scales. But I can say with about 90% certainty that it is likely to be some kind of common North American species, likely a large example of a Corn snake. Pity as I was really hoping it would turn out to be an adder.
Still don’t rule out adders being up at Ogden. “ 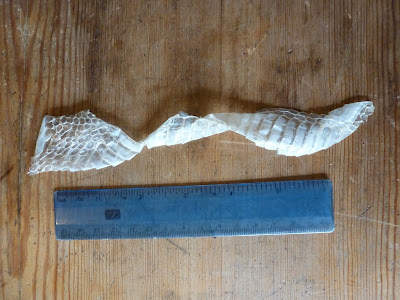