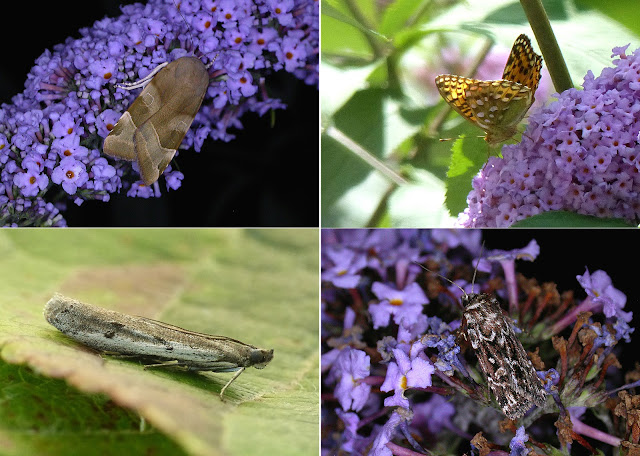 Late July to early August and probably my best two weeks or so of garden mothing ever.
Just wandering around my modest sized, suburban garden with a net, old Coolpix camera and head torch has produced some very interesting and exciting finds.
Around 50 species of nocturnal moths and nine butterfly species were recorded,
two of which are probably new to Calderdale.
Some highlights are – Clockwise:
Broad Bordered Yellow Underwing nectaring on the Buddleia – nice to see one feeding peacefully in the still of night rather than fighting for space in a moth trap.
Dark Green Fritillary feeding along side six Painted Ladies – rare enough out and about in the Calderdale countryside but this one was underneath my bedroom window.
True Lover’s Knot – a real surprise this one, maybe the larva had fed on cultivated Heathers nearby.
Small Clouded Knot-horn (Phycitodes saxicola) – netted after dark – with it’s need for dissection to secure an ID it re-sparked my interest in having a go myself. A very interesting and rewarding field of study in it’s own right. 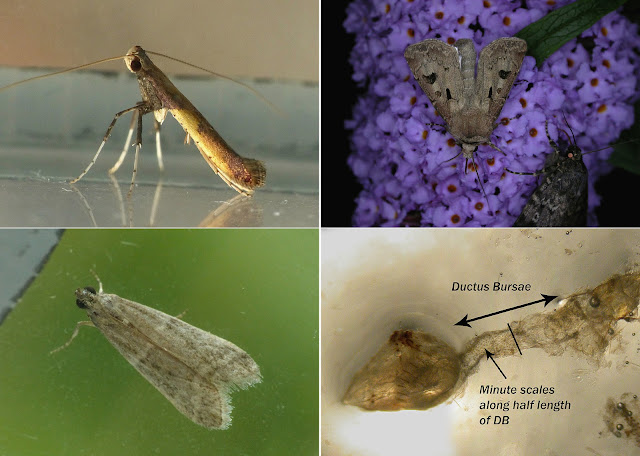 Azalea Leaf Miner – with just a handful of Yorkshire records I suspect it may be either overlooked, misidentified or maybe just not that strongly attracted to light.
Heart and Dart along with a Copper Underwing agg. – both feeding busily with their proboscis poking in to the Buddleia flowers.
And a Cacao Moth along with my annotated attempt at dissecting it – if you ever wondered what the reproductive bits of a micro moth moth look like then here you go 🙂