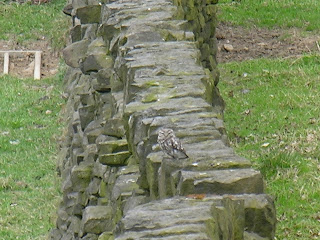 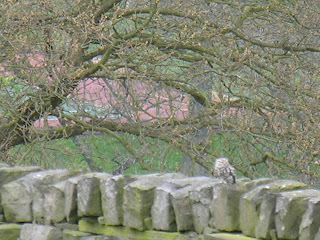 It seems to have become a fixture that we make this walk in April, partly because of the only known native, unplanted daffodils in Calderdale at one spot.
We were slightly dissapointed in them this year, finding them well gone over, with swelling seed pods. There was some discussion of the ethics of “gardening ” them, by spreading the seed along the same wood (There are thankfully no garden daffodils released into the wild there.)
We weren’t dissapointed by the very reliable little owl, though, that has been sat on the same wall for three years running!
To go back to the daffs, an article in the turn of the century “Halifax Naturalist” (century before last that is!) lists several places where wild daffodils existed, besides the Rishworth site, there was Severhills Clough -Soyland, Shibden – 2 sites, Coley Hall, Salterhebble, Sowerby Bridge to Ripponden, Jumble Hole Clough -top end – Hippins Clough.
We noticed one of the Rishworth herons had a very young chick in the nest. There are just 2 nests now. (I think the third was in a tree that blew down.)
Quite a few migrants were seen or heard singing. Some discussion was had about what was the name for baby bats. We couldn’t think there was one, but some suggestions were batlette, batling, hangling. Then we got onto a collective noun for bats, something not as negative as a swarm or a coven. So we came up with a cave of bats or a flap of bats or, perhaps the best- a belfry of bats.