We had a great day to ramble from Bradshaw to Ogden, taking field paths and stiles most of the way, on to Soil Hill, then over and down to Oats Royd NR and back via Holmfield.

The main species we hoped to see was the autumn crocus Crocus nudiflorus which is down by Strines Beck below Bradshaw, and a few at Oats Royd, near the ponds. Unfortunately we were too early this year, only finding 3 blooms. (Forgot to take pictures.)

Written accounts, and some memories of our older members, say that many of the fields in the area were covered in the crocus in autumn. Changes in farming, mainly the demise of traditional haymaking, seem to have reduced them and they could be gone soon, unless we do something to conserve them.

With my increasing interest in butterflies and moths, I was looking for larvae to bring on to adults and the four of us on the ramble found a couple of interesting caterpillars.

Birds on Soil Hill were 2 skylarks and a distant flock of c.20 brown finches, thought to be linnets.
Other birds were a kestrel and a sparrowhawk at Oats Royd. No sign of the crossbills at Ogden. A moorhen had at least one juvenile on the ponds, and sadly a freshly killed moorhen was on the path about half a mile away nearly at Holdsworth House. Looked as if it had been killed by a dog.
Three swallow nests in a low shelter at Holdsworth House. 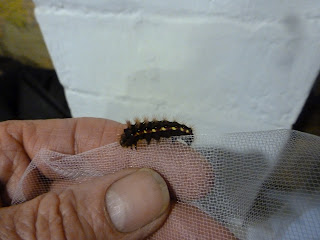 ID help please. It was eating sorrel.
There was more red on its spots than this shot shows.  Could it be the Dagger?

One footpath at Bradshaw was unuseable due to overgrowing herbage. Another near Strines Beck was all but impassable due to deep mud. At one time the landowners were responsible for maintaining footpaths across their land and could be fined for not doing so. Now they seem to engineer problems for us walkers to keep us away. One reason for our regular rambles is to keep the footpaths open. Use them or lose them !