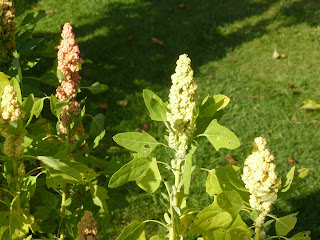 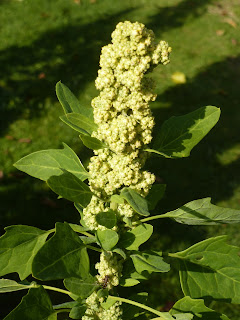 I’ve occasionally been given this seed by friends with adventurous cooking habits. It’s used like rice or couscous, but is much more nutritious, providing vitamins and protein as well as carbohydrates. It has a bland, slightly nutty flavour.
I thought it might grow in the Pennines, being a native crop of cool highlands in South America, so I bought a packet of cooking Quinoa and sowed a few of the seeds.
They shot up! I guess you can use the leaves as greens, as the plant is in Amaranthaceae, same as beetroot, spinach, and the wild plants Good King Henry, Fat Hen and Goosefoot, all of which have edible leaves.
A tragic consequence of it becoming a “wonder food” in the west is that some poor farmers in South America can no longer afford to eat their crop, or they think they can’t, as it raises more cash for them than the cost of imported rice, which is far less nutritious.
If anybody wants some seeds, I’ve got loads left.
I only got round to cooking one head while it was fat and fresh and moist. I steamed it as a whole sprig over some potatoes I was boiling. It was good, eaten straight off the stem, which stayed behind like the core of a corn-on-the-cob, only branched. I got my little crop after a mid-summer sowing.
I thought I’d leave the others to fully ripen, then dry the seeds off to keep through the winter, but the birds soon realised there was something full of goodness there. First I noticed a Dunnock perched  on the plants, pecking in to it, then the Robin, true to character, sent it off and started pecking itself.
Since then I’ve been informed it has been grown on a large scale in this country, but only as a fallow-land crop. If anyone knew of any little corners with fairly rich, disturbed soil, it might be worth sowing it in summer as a winter bird food. In gardens it would save buying a lot of expensive wild bird food.
To aid birds on a wider scale, it could be planted in odd corners of fields or muck-heaps where it might benefit House Sparrows, Tree Sparrows,Yellowhammers, Reed Buntings and lots of other seed eaters. Some would say the native seeding plants are best, which I would agree with in an area of arable farming, but here most fields are kept as lush, wildlife-unfriendly grassland.