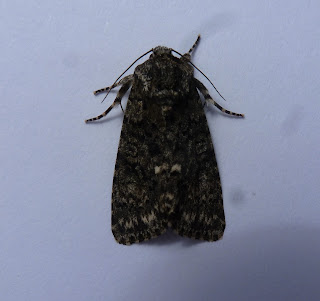 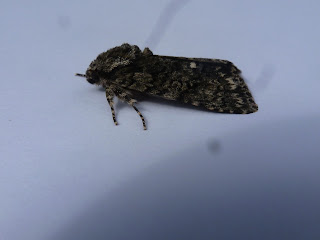 I took home a Knotgrass caterpillar (see posts below) from Ogden last autumn and kept it until emerged in June this year. I found it on Common Sorrel, so it was simple to feed at home until it pupated. I then kept it outside all winter in an unused rabbit hutch in a gauze-covered food pot. I used the original lid to keep the gauze on, after cutting a big disc out of the centre of the lid. You can buy gauze very cheaply at the Halifax Scientific Society meetings, but check it’s in stock before coming specially.

I’ve only just learned to do this as I’m in no way a lepidoptera specialist.
The Knotgrass plant is in the same family as the sorrels – the dock family – and like Common Dock Knotgrass plant has a strong root. It grows as a weed among stones often in gardens and seems as if it has a root as strong as string tied fast to something underground. I suppose that’s where its name comes from. I’ll try to get a pic of a plant and post it. Its wonderful scientific name is Polygonum aviculare.