Lime tree — but not as we know it

Lime tree — but not as we know it

In Clitheroe today I was intrigued to see a Lime tree that didn’t look quite right. The flower bracts and the immature flower buds were obviously those of a Lime (Tilia) but the leaves looked odd.

On looking closer, I saw leaves which I had not seen before on this Genus. As you can see from the photos they are a puzzle. On looking in my tree book, the only one which seems to match up is Tilia miqueliana, named after Frederich Miquel (1811-1871) professor of botany in Utrecht.

One book says—“This species is unknown in the wild state and only occurs in Japan as a planted tree, most often seen in the courts of Buddhist temples, where it is regarded as sacred. It is reported to have been introduced from China (to Japan) about 1190AD but has not yet been found anywhere in that country. Its extreme variability points to a hybrid origin.”

I’ve not seen one before. If anyone knows for certain whether my identification is correct, or whether I am barking up the wrong Lime tree, I would love to know.

Upper side of leaf 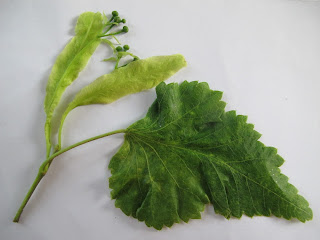 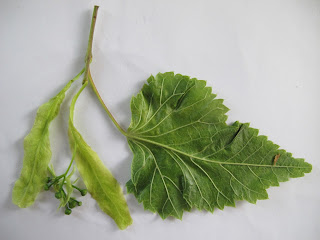