Mayflowers don’t need a notice board

Mayflowers don’t need a notice board

Our grass verges are always mown with traditional regularity but this year the first cut was much later than usual. What a surprise then to see the number of Mayflowers along the whole avenue and elsewhere, that have never been seen in decades.

It couldn’t last of course. Today the workers moved in. I wish I could say the mowing was done with determination. But it was all done without passion as the cut Mayflowers were trodden into the ground.

Elsewhere, Councillors are investing in spraying areas of ground to sow colourful (but not necessarily native) annual displays. They are very proud of these and place notice boards to inform the public of their good deeds.

Perhaps Mayflowers aren’t colourful enough, or maybe no-one recognises them anymore. They are gone now, with a sigh of relief that order is restored.

The Botanist of earlier times was known as a “Looker-Out”. A good description for a world now forgotten.

But I know where the Mayflowers are.

Good to look at the flowers

But not for long

And now they are gone 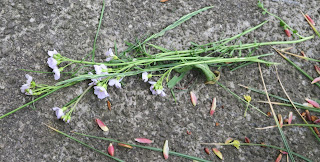