The natural hybrid between Medlar and Midland Hawthorn is now in full flower in Centre Vale Park Todmorden. It was previously ‘lost’ within Rhododendron which has since been cleared.

It has variable shaped leaves, some lobed some entire but the flowers are large and very attractive; not in clusters but single. Originally called Smiths Medlar when the hybrid was discovered in 1800 but now known as xCrataemespilus grandiflora.

Tod’s flower has 3 styles, the same as Midland Hawthorn. I have never seen another of this hybrid. Edward Kemp planted some at Dobroyd Castle in 1869 under the name Crataegus grandiflora, which is considered to be the same hybrid under an earlier name. Kemp also did some landscaping at Centre Vale, so could it be one of his plantings? 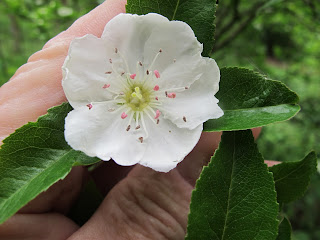 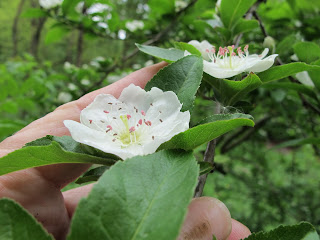