The meeting this month was a fungus foray in Stoodley Glen, which took place today. Sundays are sometimes chosen to give people who can’t attend on a Saturday a chance to join in. There was also a waxcap identification session in the fields at Broadhead Clough last Friday 16th Oct, when Kara Jackson of Yorkshire Wildlife Trust brought along laminated keys to hand out, but I wasn’t able to attend that one.

Sunday was a calm but dull day letting the changing colours of the trees smoulder through.

It really starts as you pull out of Luddenden Foot on the way to Mytholmroyd – a truly breathtakingly beautiful valley, wide spreading, with seemingly 50% each of mature deciduous trees and open fields.

The Stoodley Glen itself is wooded at the bottom end after you cross the river and then the canal, the latter dark and glassy, with dry leaves floating that parachute gently from the trees.

The woodland is “greenwood” as I wrote about in last Thursday’s Hebden Bridge Times. Occasional grazing prevents understorey shrubs and saplings springing up. So it is open and grassy.

Higher up as you walk past all the little waterfalls you come out onto wide sheep-grazed fields; this is where the blue Harebells, still flowering today, and the waxcap fungi start.

The view looking back with distant Todmorden in the centre was stunning, with fields and moorland hills and valleys decorated with trees, near and far, in every shade of green, yellow, brown, orange and bronze. There was a strange light, as Annie pointed out, with brooding shade over the higher land, and Todmorden bathed in a gentle, not quite bright glow.
Stoodley Pike above us seemed strangely animated; slipping in and out of the mist.

It was a good day for a fungus foray.

We don’t collect baskets full, not even the ones we know are good to eat. Our aim is to enjoy seeing and if possible identifying them. The complete list, not ignoring the common ones, is part of an ongoing survey, which when added to the records over many decades, should give an objective measure of fungus diversity and its changes in our area.

The best finds of the day for me were Elfin Saddle Helvella lacunosa and a Coral, possibly Crested Coral, Clavulina coralloides, attacked by another fungus, turning it grey. Also the bright Yellow Brain fungus, Tremella mesenterica. The most numerous was Amethyst Deceiver, as usual, closely followed by it buffish relative, The Deceiver. 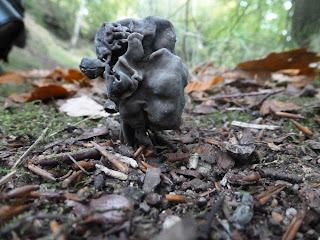 Elfin Saddle beside the track in Stoodley Glen.
The little group of native Crab-apples was fruiting well at the top of the glen, with larger fruits than some years. I pocketed a few  as they grow easily from the pips, but I never see them self-seeding. Their partner animal that evolved to spread the seed in its dung, as well as maybe breaking the turf to give them somewhere to germinate, must be one of the extinct fauna. A male Reed Bunting was nearby.
Our complete Stoodley Glen fungus list for today can be read by clicking on “Calderdale Fungi” at the top.
As we finished in good time, we all drove to Hippins Clough on the other side of the Calder Valley, to search for the Violet Coral, Clavaria zollingeri, but didn’t find it. However we did explore further along the valley-side than I had been before, to an area with an ancient wall built of huge wallstones, and an area of boulders including one as big as a small bungalow with a flat top you can easily climb up on to.
Near here was a colony of suckering Blackthorn, some of them so old they made small trees.
We put up two Common Snipe and saw a group of 11 Mistle Thrushes on some wires, oddly accompanied by one Redwing and one Goldfinch. We saw a dead Common Shrew lying on the turf.
Next weekend, on Sunday 25th October, we are meeting for another fungus/botany foray to the Holywell Green area. Feel free to come along.
The Foray starts at 10.30 for 10.45. Meet in West Vale.
Directions:
Take the Stainland Rd from the Calder and Hebble road junction.
Go straight on through both sets of lights in West Vale.
Pass one pub on the left, then a second (the Queen), and pass under a high railway viaduct.
Park or meet on the left just opposite the entrance to the industrial estate.
I will have two spare seats from Halifax town centre, leaving at 10.15.