Mosses in mind in a moist and magic valley – Colden Clough

Mosses in mind in a moist and magic valley – Colden Clough

We were privileged to have Johnny Turner along to guide us and introduce some of the many species of mosses and liverworts that grow in the woods in Colden Clough.  Peachysteve was there too and he is also very interested and knowledgeable. This was the Society Ramble on 27th January 2018.

The drizzle that started the day had the advantage that all the mosses and liverworts would be perked up and looking at their best.

First we headed to the calcareous rock outcrop that we have long known at the top of Eves Wood, on the top edge at the Heptonstall side.

Here we saw TWISTED MOSS Tortella tortuosa which makes compact cushions on rock that is not too wet and acid.

We discussed the rocks and how they appear also at Hardcastle Crags in one small outcrop which the National Trust carefully preserve, even removing small trees that prevent the sun getting in.

Mountain Melick was found recently at Hardcastle Crags by Annie Honjo after decades of it not being recorded and these rocks at Eves Wood also used to hold this rare grass. However Summer is the best time to look for it. The small ferns we often see in old walls with lime mortar – Maidenhair Spleenwort, Wall Rue etc. are also a feature of these calcareous outcrops and Ivy can indicate the rocks from a distance. 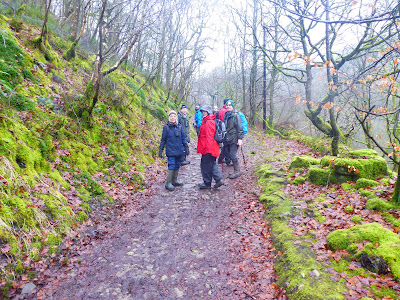 The party of nine plus Meg the Black Lab. (out of shot) 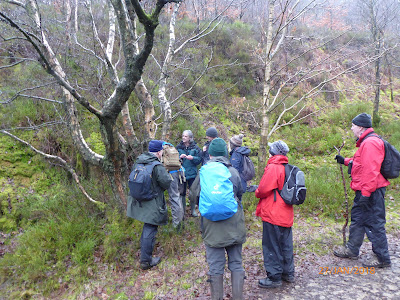 Soon we were off in search of a new-to-us outcrop of the same rock on the far side of the valley, which Johnny had reported to us. (So there are new things to report on geology in our area!)

On the way we found the remains of a fresh Woodcock, eaten by a raptor of some kind. The bird of prey had left the wings, part of the skull with the long, straight beak, and one foot of the Woodcock, where it had eaten it, beside the track.

Along the way we looked at many different mosses of which I can only list a few. We were shown LANKY MOSS Rhytidiadelphus loreus, which was not recorded during the industrial years, but has now become very common since the Clean Air Acts were passed.

It’s relative the ELECTRIFIED CAT’S TAIL MOSS Rhytidiadelphus triquestris used to be known as BIG SHAGGY MOSS till many bryologists picked up the common name – very apt – from across the Atlantic. This is one of the aspects of bryology – the same species can be found right round the northern hemisphere, wherever the tiny spores are carried on the winds. 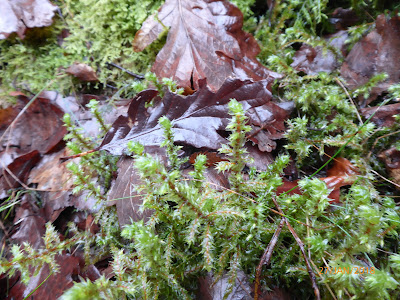 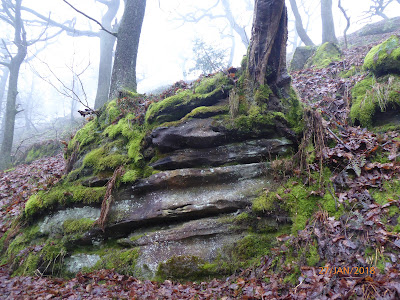 Tree growing implausibly on top of solid rock, as they often do in the Pennine Cloughs

Sphagnum mosses are most often seen on the moors in wet places, where they are valued for absorbing huge amounts of water and playing a part in flood prevention, but Colden Clough has a lot of SMALL RED SPHAGNUM Sphagnum capillifolium on its slopes.

A tiny liverwort we were shown was a rare one; FINGERED COWLWORT Colura calyptrifolia, which Johnny had found for the first time in Calderdale. He’s not a fan of the new policy to give every organism a common name as well as the scientific one, but he’s been doing it for so long he’s got used to the latin/greek.
I think common names could help more people to get into it, aid awareness and thus conservation.

After another off-piste scramble we got to the newly found calcareous rock outcrop on the western side of Colden Clough. It’s not as big as the one on the Heptonstall side, but has the same distinctive appearance.

We then walked along the contour to some huge rocks quite near the Blackshaw Head Road. Here there are overhangs and small caves in which Johnny wanted to show us the moss GOBLIN’S GOLD Schistostega pennata. This moss grows in the deepest shade where nothing else can compete. Chloroblasts in the leaves are actually mobile, and turn like tiny lenses to capture the maximum of the available light, which give the effect of shining greenish gold. However, it was such a dull day that the effect wasn’t happening for us on Saturday. In Hokkaido there is apparently a shrine to this moss at one place it grows and is much admired by Japanese nature lovers.

I recalled that knowledge of mosses used to be more ingrained among members of the Halifax Scientific Society; I occasionally heard an urban myth in which one gentleman member “borrowed” someone else’s girlfriend to go looking for the Goblin’s Gold. Shocking!

All these mosses and the liverwort can be found online.

If anyone would like to hear a talk on Calderdale Mosses and Liverworts Johnny Turner is bringing us an illustrated lecture on his subject at the New Central Library, Halifax, at 7.00 for 7.15 on Tuesday 13th March. Entry is free with donations accepted to the Halifax Scientific Society.