Native Daffodils and equally beautiful (interesting?) Toads on the Roads to their ancestral breeding ponds.

Native Daffodils and equally beautiful (interesting?) Toads on the Roads to their ancestral breeding ponds. 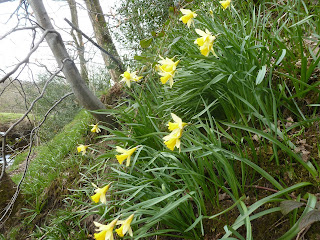 The Native Daffodils are well out at their only known local site. It’s hopeless to think they might still be in bloom on the programmed Daffodil Walk on 14th May. If anyone would like to take a walk out to see them this Wednesday 13th April, I am willing to lead a group. Please show interest by leaving a comment below. I am thinking about 5.30 pm, but that’s open to adjustment. Confirmed: Meet at this time on the side road down to Rishworth Palace Flats. (Not in the flats car park.) Lifts available.
The turn-off is easy to find; left opposite the Rishworth bus turning circle, which is just beyond Rishworth School on the Oldham Rd a few miles beyond Ripponden. 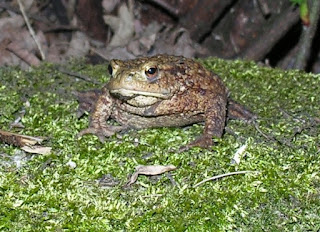 Common Toad, much more widespread in Calderdale than the old records suggest, but amphibians were not much mentioned, and maybe were taken for granted.
It is a Calderdale priority action species, as the deep ponds and old dams it needs to breed in are often drained for housing. Malcolm Smith in his British Reptiles and Amphibians (New Naturalist Series – available to borrow from our library) maintains they are site-faithful, and can walk up to 5 miles when they disperse, and come all the way back when old enough to breed.
This fact alone makes them a fascinating animal to me, and when we see that so many individuals get run over crossing roads near their journey’s end, they deserve our attention.
Several of us in the Hx Sci Soc go out in the evenings in March and April to rescue them on the roads and put them into or on the edges of their ponds. The rush happens just after dark, so we generally only stay out about an hour.
They started appearing on 12th March this year, but the big night at Boulderclough was 3rd April, when four of us rescued 113. There were several sites for which we had only one volunteer or none.
There may be a few more nights of movement, as the cold spell on Friday/ Sat 8th and 9th has put a stop to toading. I have just heard that there were 2 toads tonight (Sunday) and a Palmate Newt, equally worthy of saving from the tyres.
Well done to all the volunteers throughout Calderdale ! (there are several sites and an active group that co-ordinate with the help of Facebook in the Upper Valley.)
The toads seem to move when the temperature reaches 8C, and a rush occurs when it reaches 10C or warmer. They must respond, I think, to a combination of temperature and day length.
In June and July you may notice while out on walks near water that the ground is studded with hundreds of tiny toads, often mixed with tiny frogs. Many of these will be eaten by birds and animals, making them an important part of the food chain; another reason to preserve them and their ponds.