Ten people turned up today for this annual start to the Walks calendar. Beginning at Clay House we walked up through North Dean Woods before following the stream to Pickwood Scar and continuing around Norland Moor. A very enjoyable day with a good bird count      (more details to follow from walk leader Steve B) 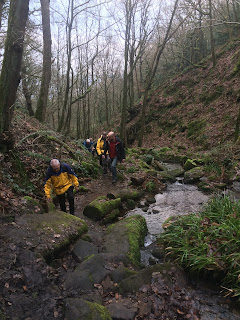 Thanks, Mick, I just turned on to do a brief report; a fuller one tomorrow. But today’s count was 32 species, which equalled the record count of last year, though a partly different range of species was seen. Steve B.
2nd January 2020
These New Years Day Bird Counts have settled into a run of consistent results. This year and 2019 had equal numbers of species with 32 each, in 2017 the tally was 31. Fine weather is a factor. Given a foul day the count would be lower obviously; we have been lucky these last three times.
As above the two last counts were 32 and it is interesting to look at the similarities and differences in the two counts.
There were 23 species in common to both counts, 1st Jan 2019 and 1st Jan 2020:
Blue, Great, Coal and Long-tailed Tits, Nuthatch, Chaffinch, Bullfinch, House Sparrow, Starling, Blackbird, Mistle Thrush, Redwing, Robin, Collared Dove, Woodpigeon, Feral Pigeon, Jay, Crow, Magpie, Jackdaw, Rook, Black-headed Gull, Buzzard.
Nine species in 2019 but not 2020: Dipper, Dunnock, Wren, Raven, Pheasant, Stonechat, Little Owl, Mallard, Song Thrush.
And there were nine species in 2020 but not in 2019: Heron, Goldfinch, Reed Bunting, Fieldfare, Redpoll, Treecreeper, Great Spotted Woodpecker, Greenfinch, Common Gull.
The Fieldfares were in a huge flock covering two fields, very impressive, and the Redpolls were flitting charmingly through the trees along the top of North Dean Woods feeding from the birch seed-heads.
With thanks to the participants in the walk yesterday, 10 in total as Mick stated (8 in 2019.) All played a part in the final total on the walk as well as bringing their sightings from home first thing and on the way to the meet (without detours to sites with localised species.)
Two of us thought we heard a single note from a Green Woodpecker at the lower edge of Norland Moor where they are often present, but it was very brief so I decided not to include it.
There was some discussion whether to include domestic fowl, etc. I maintained they are bird species, others thought we should stick purely to self-sufficient wild or feral birds.
The bad news about the Little Owls adjacent to Norland Moor is that Jackdaws usurped them from their tree hole last spring so that’s probably why we didn’t see them all summer or this winter. Jackdaws in tree holes have become the norm throughout Calderdale. At one time I used to see them using only holes in old buildings and crevices in quarry rock-faces, where they still nest.
These counts are samples of the current state of local birds. Who would have thought a few decades ago that Nuthatch and Buzzard would be seen regularly? Also to run into a Raven isn’t that unusual now, and to find a Song Thrush or a Greenfinch is a fairly noteworthy event.
These records might be interesting to read in the future. Another way of “sampling” bird populations is to time a count on a walk, noting every species. I seem to get about 14 species on a good day in half an hour, though I haven’t sat down with my notebooks to work out the average. It’s OK to count a bird if you identify it without doubt by its call or song. The habitat needs recording; upland, waterside or woodland, etc.
Perhaps we could initiate a regular Spring Bird Count every May-day on 1st May?
SB