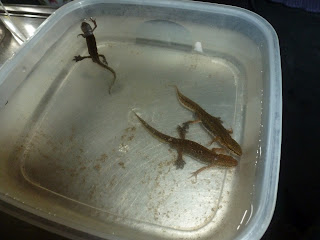 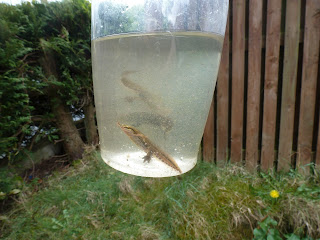 Two of us were called by a member of the public who wanted to clean out their small pond at Pellon, but found “lots” of newts in the silt in the bottom. There were no plants whatsover in the pond, and no newts visible, but when we started netting the silt we soon found these, all males and all Palmate Newts. We advised they’ve left it too late for this year, and should wait till next winter.
The male can easily be identified in spring by his raised crest which is only on the top of his tail, not his back and tail. Also a feature which only Palmate males have is a little black thread-like appendage to the end of his tail.
Smooth Newt (sometimes called “Common Newt”- a misnomer for Calderdale) has only been known from Cromwell Bottom, at Newt Corner along with Palmates, but this spring has been found high up at Todmorden, near Sourhall, by Charles Flynn. The find of the year – so far!
The internationally threatened, legally protected Great Crested or Warty (as opposed to Smooth) Newt is known from 3 places in Calderdale, all on private land. At least 2 of these sites had them introduced a long time ago on license.
These three were put in a pond nearby where they would be safe.
﻿