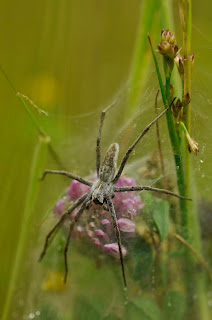 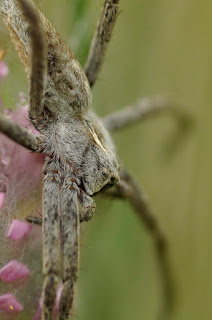 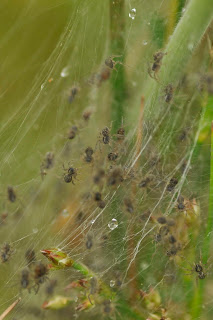 Pisaura mirabilis guarding her young today on waste ground in Boothtown. The female carries a silken egg-sac around under her body until the young are nearly ready to emerge, then spins a tent-like nursery in which she sits. When the dozens of young hatch she guards them from the outside of the nursery for a few days until they are ready to make their way in the world.

Notice she has lost a leg in her adventures, probably a fairly recent injury because it has not begun to regenerate. Spiders are able to grow back lost limbs a little at a time with each successive skin moult. A spider this size would moult several times in her life.

With a body of length 12-15mm this is a large and unmistakable spider (the clover flower behind her gives a sense of scale) and the only British species of the genus Pisaura, common in the midlands and the south but with a patchy distribution in the north. Over the moon to find this spectacular beast so close to home!