Our monthly talk open to all this Tuesday, but before that a hike this Saturday 10th September. (See below.)

Our monthly talk open to all this Tuesday, but before that a hike this Saturday 10th September. (See below.) 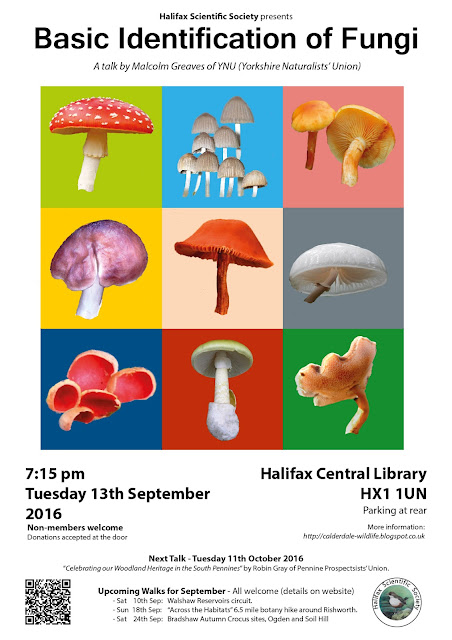 The walk on 10th September is programmed as a hike; it’s about 7 miles round. We follow paths up one side of the three Walshaw Dean Reservoirs, and back down the other side. We found we had to push through tall bracken last year for about 100 yards at the top end of the top dam, but we were on a permissive footpath. We will sit for a while to eat packed lunches on a convenient low wall, and should be back to the cars by mid afternoon.
There are, apart from the wide views and possible wildlife encounters ( including Marsh Harrier and hundreds of froglets and toadlets last year,) visible signs of the miniature railway that was used during the reservoir construction. Eyewitness accounts can be read in the famous local book “A Springtime Saunter” by Whiteley Turner, including these vivid descriptions of sounds he leaves us from 1905. . . .”awakened by the roaring of some terrible monsters fighting” .  . . looking out of the bedroom window they see. . .”the engines puff and snort in their efforts to proceed”. (The writer and his companion lodged at a farm near Blake Dean, which is still there.)
THE WALK – the event went well, with seven people taking part. The only drawback to the proceedings was the hordes of midges that came when we sat down for our picnic. As we ate our sandwiches, they tried to eat us! Annie’s insect repellent was effective, except she had to supply all of the rest of us (all blokes ! typical ) and she ran out ! Even though the spray stopped them biting, they still crawled on any bare skin they could find. We could see a gamekeeper grass trimming round shooting butts. He had come prepared with a net over his head; his peaked cap keeping it away from his face.
The find of the month was a clubmoss! This was identified later by Peachysteve as Fir Clubmoss, Huperzia selago.  This is known from only one other small patch in Calderdale, at Ovenden Moor Windfarm, where, amazingly, it grows along with a second species of clubmoss.
THE TALK – Malcolm brought us a very interesting and entertaining talk with good clear images on the screen, expertly arranged and labelled. A slight correction re the poster is that he is mainly with the Mid-Yorkshire Fungus Group, though also active in the YNU.