We had lots of fun dipping our nets and turning stones over in the water. 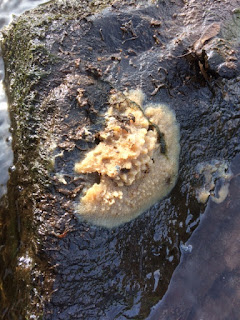 This freshwater sponge was under many of the stones just below the weir on the River Calder. We had been given a tip that Crayfish could be seen there but didn’t find any. 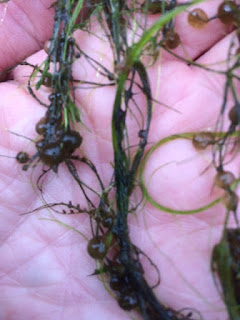 This unidentified water plant had globular growths on it. Possibly eggs of an animal, but as they were in lots of different sizes, I thought they were part of the plant. Dredged from the pond with the dipping platform near Tag Cut. 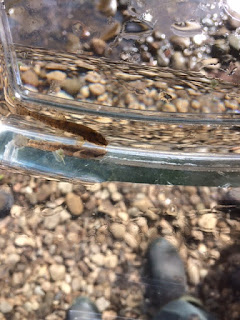 There were many of these little fish, Stone Loaches I believe, definitely a species of loach, in the Calder on a pebbly beach on Brookfoot Loop. A Kingfisher obligingly showed us how it could easily catch them, or another species of fish, very close by.
Previously I had only seen loaches in the River Dee in North Wales.
The Pond Dipping walk was not very well attended, just five people including the leader, suggesting pond dipping isn’t thought of  as an Autumn activity. The spring sessions are well attended. Apart from the specimens above, we also found many immature newts still with their feathery gills (Reuben was the champion catcher of these,) and water snails, including tiny bivalves, like miniature cockles from the sea, plus lots of insects including large Water Boatmen and Dragonfly larvae.
With many thanks to the Cromwell Bottom team who gave us access to the cabin with hot drinks/ snacks/ ultra-clean toilets and biological reference material. Much appreciated!