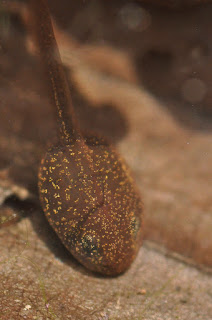 The changes this week have been much less dramatic. Their mouths seem to be bigger and stronger as they forage among the vegetation. They also vary hugely in size, even though they all seem to be at a similar stage of development and all came from the one clump of spawn. 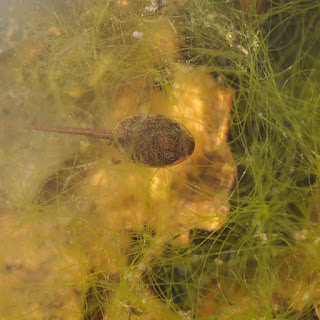 They are also getting more difficult to photograph as they seem to prefer the murkier areas that are becoming choked with blanket weed. It doesn’t seem to impede their progress, they just swim straight through it, and I think they are eating it, but they mostly nibble at the algae at the side of the pond or in the detritus at the bottom or on dead leaves. 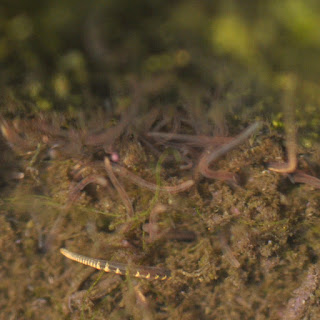 A colony of tiny, worm-like animals attached to the side of the pond. They wave around constantly and vigorously and retract immediately when touched.
A kind of hydra?
Any information welcome. 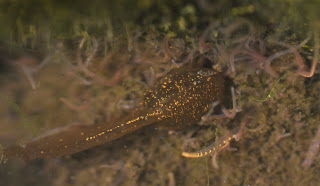 A tadpole barging straight into them but the ‘worms’ didn’t retract. If they are hydra they sting and feed on small invertebrates like daphnia. 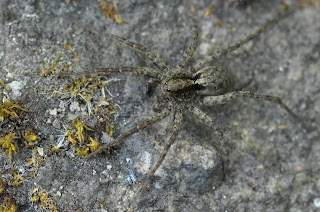 Wolf spiders on the stones around the pond edge. This is a female, one of the Pardosa genus, probably monticola or palustris. 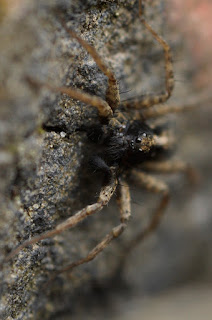 A male, you can just see the black palps between the front legs. I watched one yesterday displaying by raising and vibrating his palps to a seemingly entranced, if touchy, female – fascinating!