Take note of the Old Beech

Take note of the Old Beech

Our valley was planted in the early 19th century with Beech trees, a species which would have been a novel species for our area at that time. They have been a remarkably resilient tree, surviving through a century and a half of terrific pollution.

But; All the original Beech are now approaching 180-200 year old and entering their final years. In 20 years time most of the big trees will have gone. They do not grow downwards in old age as Oak does; for when they decide time is up, they don’t linger.

We should not help these old Beech on their way by removing them for woodland management purposes, where the emphasis now is to encourage other species such as Oak.

I think we should enjoy them while we can and leave the best specimens well alone in any management scheme. We will never see again as many massive Beech as we have at present.

Better by far to concentrate on the prolific number of Beech saplings which are insidiously springing up as under storey in many woodlands. This is a problem that is easily solved at present but if neglected will kill the ground flora and most of the other tree species in the wooded area.

Get out and enjoy, photograph and record these huge Beech; they won’t be around for much longer.

The photo shows a multi-stemmed huge Beech on the HSS walk to Sun Wood in June this year. But also note the bleeding canker which is affecting Beech throughout the valley. This is quickly hastening the end for many of them as the fungus like organism cuts off the flow of sapwood. 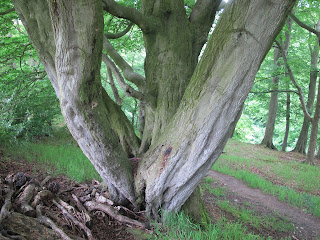 Also note the arborglyphs written in the central trunk. Was this a boundary tree, coppiced or was it bundle planted?