This wool is alive

This wool is alive

The bark of this tree has white waxy woolly areas, which has been secreted as a covering by the Felted Beech Scale insect (Cryptococcus fagisuga). It only inhabits Beech species.

No male insects have ever been found and fertilisation is not required for the offspring (parthenogenesis).

The scale insect makes small incisions and feeds on the soft tissues of the bark but does not cause serious damage to the tree. Damage occurs when the Nectria coccinea fungus spores gain entry to the tree through the feeding holes. This fungus then blocks the tree’s vascular system, causing serious injury or death.

Damage was so serious that in 1902 the Rev. Wilks feared that –“Beech is doomed all over the country and the next generation will only know by pictures how gloriously beautiful our forest Beeches have been”.

Look out for this often seen woolly covering and think what damage a tiny 1/16″ insect can precipitate in such a huge tree. 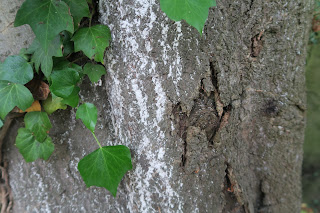