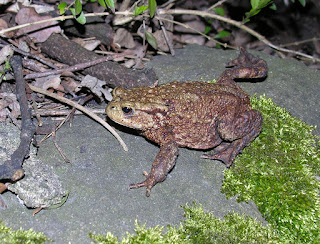 We could do with some people who could patrol several nights, maybe alternating at sites to give people a night off.

WASHER LANE This once massive colony has now disappeared due to firstly to the Copley Data Centre being built, then dams being drained and built over. No toads sighted this year so far.

BOULDERCLOUGH DAM  10th – 64 toads (a few couples in amplex) 6 dead toads and one Palmate newt, several frogs.  11th – 30 toads including 7 pairs in amplexus. Several frogs and a fabulous frog chorus in the rain from the bottom little pond.

COPLEY NEW ROAD   10th – first sighting of toads on this new road, though I had predicted to Hugh Firman the Conservation Officer that there would be a crossing. There was always a lot on the track that used to be there.

10th – 9 toads moved from the Copley new road, 23 squashed. Four males in the nearby pond. Snag with this crossing is that toads are going both ways. On 11th I moved 6 couples in amplexus, 8 singles and 4 dead.  There was one big fat Palmate newt. This new road is very dangerous with a risk of speeders; one guy has already written his car off, and the lamp post he hit. Hi-viz gear is most advisable, and preferably at least two patrollers so as a team they can alert each other and oncoming cars to people in the road.

On 12th there were 2 patrollers at each of the two sites mentioned above. Not got the count for Boulderclough Dam yet but at COPLEY NEW ROAD we had 24 toads including 2 pairs in amplexus, and 12 dead, Six Palmate Newts were picked up from the road. THE TRAGEDIES of this road are that when amphibians go onto it, they can never get off; the kerbs are too high and smooth for them to climb. So they go wandering along looking for a way up till the fall down the gullies. Each of about five of these I looked at had several toads and newts in the filthy water. I don’t know if they are trapped, or can find their way out through the drainage system. If they did so, they would be well off course for their breeding pond.

Timings – movement starts at dusk, currently about 6.30. You can stay as long or as little as you like. I did 1 hour 15 mins in the rain on Saturday at Boulderclough, and after an hour off to do my weekly shop, just 15 mins at Copley New Rd.

____________
An observation on scavengers of the dead toads: I have wondered who or what clears up the dead toads we see during an evening. (They have mostly gone when we return on the next day.) I was passing the Copley New Road toad crossing this morning (12th) and saw a crow picking one up. There may be others that take advantage.

A heart-warming story from Gordon at Lumbutts via Annie: