Toads on the move

Toads on the move 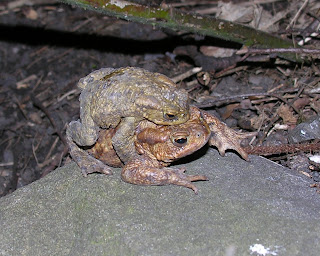 Female Common Toad Bufo bufo with male on her back, moving to the breeding pond “in amplexus.”
Photo SB

The toads started moving at Washer Lane, Sowerby Bridge on Saturday night in the rain, when the temperature went up. They’re about a fortnight later than usual, but there should be plenty of time for them to lay their spawn and for the tadpoles to catch up.

There are no where near the numbers we used to get at Washer Lane, which was over 2000 one spring. Biggest counts so far here are 12 on Sunday and also 12 on Monday night. The toad patrol volunteers are moving larger numbers at other sites.