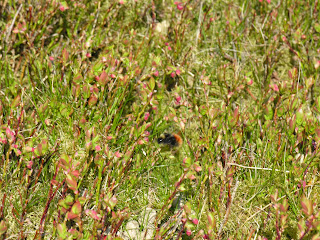 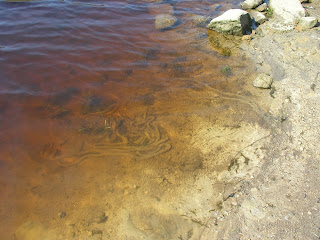 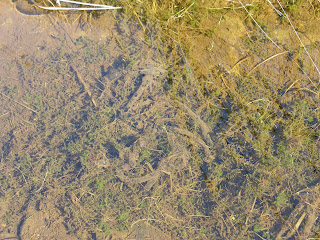 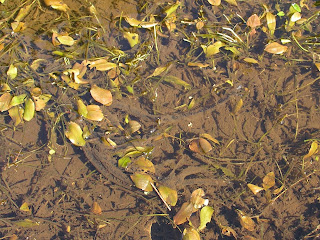 Found my first ever Bilberry Bumble Bees on the Burnley Way footpath south side of Widdop Resr. 17th April. A scarce species, sometimes referred to as Mountain Bumble Bee. Had an expert with me today (Edie) who confirmed my identification. I think they are consistently like this – ginger abdomen, with a black thorax crossed by two yellow bands. We also saw a couple of Green Hairstreak Butterflies, far too flighty to photo.
The toads we have known about for about 10 years but I’ve seen no evidence except a dried-up roadkill.
Last Sunday 17th, I found spawn in the catchwater drain on the north side of the resr., just before the first pine. Also near the shore of the resr. itself, in the peaty water. The strings of jelly have swelled up, and become covered with sediment or algae, so its not fresh that day. Looking like the intestines of something disembowelled in the water!
Today, 22nd, the tadpoles had all just about left the jelly, just one group still hanging on to it.
We thought it amazing that toads should breed at such an altitude, (about 350m) but I have since come across them at a similar altitude at Gorpley Resr., south of Todmorden.
Good views of Common Sandpipers and Willow Warblers, but no reptiles despite the sun.